Jasprit Bumrah banged one short and despite the steep bounce the wicket offered, Dean Elgar did not duck it and got struck on the helmet.

Jasprit Bumrah banged one short and despite the steep bounce the wicket offered, Dean Elgar did not duck it and got struck on the helmet. Medical attendants rushed out and to Virat Kohli s dismay, the play for the day was called off. The Wanderers pitch for the third Test at Johannesburg has been in centre of controversies because of the way it has misbehaved with extra bounce and the way surface exploded.

Michael Holding slammed the wicket earlier in the day, Two out of 100 [is my rating for the pitch]. It’s a s**t pitch. You can interpret that. They should have called it off when (Murali) Vijay got hit. This is not a cricket pitch, this is dangerous. Call it off, forget it. You can’t play cricket on that. I have no idea what has gone wrong but I know it’s not a good cricket pitch. The last time I saw something like this, the match was abandoned – in Jamaica 1998, and it didn’t even last this long.

South Africa chasing 241 to win, are 17 for 1, when the play was called off by umpire Aleem Dar and Ian Gould. The umpires are well within their rights to stop play.

The pitches can be rated very good , good , average , below average , poor and unfit .

Unfit: A pitch may be rated ‘unfit’ if it is dangerous.

– It is recognised that a limited amount of seam movement is acceptable early in the match and that a pitch may develop some unevenness of bounce for seam bowlers as the match progresses. This is acceptable, but should not develop to a point where they would be described as “excessive”.

– It is acceptable for a pitch to offer some degree of turn on the first day of a match, particularly in the sub-continent, though anything more than occasional unevenness of bounce at this stage of the match is not acceptable. It is to be expected that a pitch will turn steadily more as a match progresses, and it is recognised that a greater degree of unevenness of bounce may develop.

– It is impossible to quantify the amount that a ball is “allowed” to turn as bowlers will turn the ball differing amounts. The type and identity of bowler shall be taken into account when assessing this factor.- In no circumstances should the pitch ‘explode’.

This pitch has certainly exploded at several points. Here is what the ICC rules pertaining to the pitch.

6.4.1: If the on-field umpires decide that it is dangerous or unreasonable for play to continue on the match pitch, they shall stop play and immediately advise the ICC Match Referee.

6.4.2: The on-field umpires and the ICC Match Referee shall then consult with both captains.

6.4.3: If the captains agree to continue, play shall resume.

6.4.4: If the decision is not to resume play, the on-field umpires together with the ICC Match Referee shall consider whether the existing pitch can be repaired and the match resumed from the point it was stopped. In considering whether to authorise such repairs, the ICC Match Referee must consider whether this would place either side at an unfair advantage, given the play that had already taken place on the dangerous pitch.

6.4.5: If the decision is that the existing pitch cannot be repaired, then the match is to be abandoned as a draw.

So if the captains agree and if the pitch can be repaired, the play can continue. Sunil Gavaskar is livid and Shaun Pollock too agrees with Gavaskar. The pitch has not deteriorated and it was short ball that struck Elgar was a short-pitched one and it was more a technical fault.

Indian team manager as quoted by ESPNCricinfo, The match referee called me at tea time in case the wicket got dangerous, in which case both the captains would be consulted. We had the view that the wicket has been the same for all three days. Today we had the highest strike rates and the least wickets. We would like to continue playing. The match referee was fearful that in case the new ball was going to be taken, it might be behave dangerously. The ball that hit Dean Elgar on his helmet was the reason play was called off today. We are willing to play. Umpires are the final judges on the fitness of the ground, regardless of the views of either of the captains. The final decision lies with the umpires. Expecting a decision tomorrow morning.

Only 2 Tests have been abandoned so far because of dangerous conditions. The first instance was England vs West Indies at Sabina Park, Jamaica. The next instance was in February 2009, a match between the same two teams in Antigua was called off because of a soft outfield. 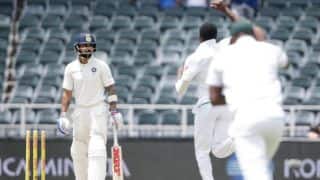 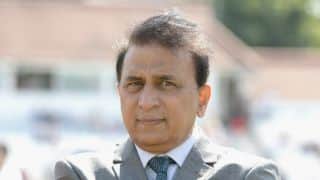