By virtue of a 5-wicket win, South Africa remain alive in the six-match ODI series versus India.

It was lack of runs that saw Rohit give his wicket away. Unable to read the slower one from Rabada, Rohit went early into a drive and handed the bowler a return catch. At the end of the first Powerplay, India managed 53 runs for the loss of 1 wicket.

Shikhar Dhawan s scratchy century: Not the most fluent hundred for Shikhar Dhawan. His knock comprised of quite a few French cuts and bottom edges. He along with Virat Kohli steadied India s boat amidst rough waters.

Dhawan did not shy away from playing his shots and smacked Andile Phehlukwayo and Kagiso Rabada for sixes. He eventually managed to reach his 13th ODI century in 99 balls.

Lightning interrupts play: With predictions of thunderstorm in Johannesburg, umpires deemed it right to stop play after 34 overs. A huge cloud over and lightning were enough for grounds men to cover the pitch and bowling run up.The game resumed after 54 minutes of break.

MS Dhoni s feisty 42: South Africa came back strongly after break in play, scalping Ajinkya Rahane, Shreyas Iyer and Hardik Pandya in quick successions. Onus was on Dhoni to help India reach a moderate total. He anchored himself at one end, and scored a 43-ball 42, which include 14 in the last 2 overs.

South Africa started off positively in pursuit of 290. Aiden Markram was looking good, despite few edges to the fence. Markram and Hashim Amla took quick singles, and kept the scoreboard moving. Nonetheless, Jasprit Bumrah struck once again to trap Markram LBW for 22. Along with Markram, players left the field due to another lightening, followed by heavy rains.

It was another long delay, reducing the target to 202 off 28 overs, South Africa needed 159 off 124 balls. Three bowlers could bowl six overs each while two could chip in with five.

After the rain delay, it was quite obvious that the wet ball would create problems for wrist spinners. Nonetheless, Kohli played to the team’s strength and introduced Kuldeep from one end after resumption. Kuldeep got turn, not massive, and removed JP Duminy and Hashim Amla. Duminy came far down the track and missed the length of the ball completely. It was a debatable decision. Since Markram wasted the only review, Duminy had to walk back.

Amla, trying to clear the ropes, went for a glory shot. He was caught brilliantly by Bhuvneshwar Kumar. His presence of mind deserves accolades. Bhuvi took a fine catch, and followed it up by throwing the ball in the air anticipating to touch the ropes. He balanced himself, and caught hold of the ball to dismiss Amla.

De Villiers slammed a 47-ball 77 versus India in the Pink ODI in 2013. In addition, he went berserk against West Indies, in 2015, to register a 49-ball 148. De Villiers, thus, has a knack of scoring big in pink attires, and looked set for another such knock. Courtesy a quick start, targeting Yuzvendra Chahal, de Villiers was removed by Pandya. A slower one deceived the batsmen.

The no-ball that hurt India

Chahal had David Miller trapped LBW in the 18th over. However, a no-ball turned the tides emphatically. At that time, Miller was on a 8-ball 9. Soon, he made India pay heavily for their follies. The unforced errors carried on (with no-balls, wides, misfieldings), and Miller-Heinrich Klaasen took the game away in no time. The duo added 72 off 41 balls (including overs such as: 13, 15 and 16 runs respectively). Chahal and Kuldeep leaked runs at over ten, and South Africa got off the mark in the series. They also remained unbeaten in Pink encounters.

While Miller blasted Pandya, and took on the spinners, Klaasen used the reverse sweeps and other cheeky shots to good use. His 43 (not out) sealed the deal for hosts. The duo struck ten boundaries (8 fours and 2 sixes), resulting in total carnage. 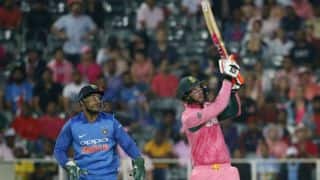