Virat Kohli goes by form, disregarding what best suits the situation. India lose, and Kohli explains it saying his team did not deserve to win.

This, however, is not an unfamiliar scenario. Kohli goes by form, disregarding what best suits the situation. India lose, and Kohli explains it saying his team did not deserve to win.

Chahal had taken 11 wickets in the first 3 ODIs. All the same, there was a reason South Africa did not opt for a full-time spinner at Johannesburg. Chahal managed a wicket (that of David Miller, who plundered 39 off 28), but the wicket was not made for him or for any spinner, for that matter. Not to forget that Chahal had offered Miller a reprieve with a no-ball. And then, there was a dropped catch. Come to think of it, Kohli was right that India were not worthy of victory.

The spinners are not to be blamed, for the track was harder than what was dished out in the first three ODIs. There was turn, but Chahal s wrist is not that difficult to read and Kuldeep often succumbs to pressure. India needed their best in the middle. Kohli thought otherwise. Bhuvi bowled 4 overs and Bumrah 5 compared to Kuldeep s 6 and Chahal s 5.3.

Before that, the rain break had dampened India s momentum in the first innings. They managed 111 from the last 20 overs, losing 6 wickets. They were lucky that MS Dhoni scored an unbeaten 42 off 43. The numbers tell you that his hard-hitting skills are fading away, but he was often kept off strike. There was little he could do to unleash those monstrous sixes, for South Africa know what lengths to throttle him with.

There is no update on Kedar Jadhav s hamstring injury. Shreyas Iyer replaced him, but that dropped catch we spoke of was spilled by Iyer. That being said, India need Kedar s round-arm, slow off-spin. Shreyas can roll his arm and drop leg-breaks, but he is not as affective and, more importantly, peculiar as Kedar.

Manish Pandey and Dinesh Karthik have been warming the benches. If Kedar does not recover, India will have to dish out an XI that compliments their strategy.

Kohli, on the other hand, needs more than intent. He has been low on stratagems. Maybe a word or two with his deputy Rohit Sharma should help.

But enough ranting about India.

South Africa seemed to have forgotten what they did in the Test series. They had launched an attack before an Indian seamer could produce a snorter. It was, in fact, a lesson India learned from them, and came up triumphant in the final Test.

Come ODIs and South Africa go on the defensive against spinners. Why they do that is difficult to decipher. However, now that they know what brand of cricket they should approach against spin, India will have a tough time keeping them in a shell. Aiden Markram has found the key to success.

Ajinkya Rahane, India s back-up opener, had batted at No. 4 and scored a delightful 79 in the first ODI. What changed Kohli s mind is not known yet, but at this point he prefers Rahane at that position. However, Rahane has not been in his elements since: he has managed a meagre 19 from his next 2 innings. That being said, India will have to be patient with him. He will take time to get into the groove with the old ball, for his primary skills are to manoeuvre the new, moving ball through the gaps.

Rohit has only 40 runs in the series so far. To make matter worse, he averages 11.45 in South Africa. There is not an iota of doubt over his superior talent, but he will have to come good at crucial junctures as well. The World Cup is not far away.

Not many play the back-foot punch as beautifully as Amla does. Shuffle a bit and let the bat flow. That, though, has put him trouble. Bumrah has dismissed him twice with in-swingers. In the pursuit of punching, Amla seems to overlook that the ball may jab back at him.

South Africa, too, had an error in their judgement, but they luckily did not have to pay for it. They sent JP Duminy ahead of AB de Villiers, the best batter in their line-up. If India manage to choke Duminy and ensure ABD gets to play fewer deliveries, the series will be sealed at Port Elizabeth itself as India will win an ODI series for the first time in South Africa.

India have played 5 ODIs here without tasting victory, and their highest score reads 176: nowhere else in the world have they played 3 or more matches and lost everything. South Africa, on the other hand, have won 20 and lost 11 of their 32. 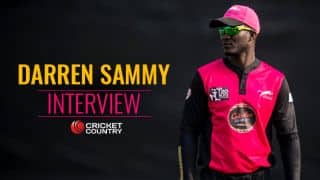