India won the fifth ODI of the six-match series by 73 runs, sealing the series 1-4. This was India s ODI series win in South Africa.

India won the fifth ODI of the six-match series by 73 runs, sealing the series 1-4. This was India s maiden ODI series win in South Africa. Let us walk through the top highlights of the match:

Dhawan has been a thorn in South Africa s plans in the ODI series thus far. He time and again took pressure off the middle-order batters and provided solid starts.

At Port Elizabeth, too, Dhawan dished out his drives, cuts and pulls to negate good bowling from Morne Morkel and co. He scored a swift 23-ball 34 before falling to Kagiso Rabada.

Rohit s South African tour has been nothing but a horror. Determined to make amends, Rohit played a hostile innings to quash the critics.

As expected, the longer Rohit plays, the quicker the flow of runs. Helped by 6 fours and 2 sixes, Rohit reached his first fifty-plus ODI score in South Africa.

Rohit held the innings together for India, eventually scoring his 17th hundred in the process. He fell for 115 at a crucial juncture of India. This was his maiden ODI hundred on the South African soil. His previous best score read 23 here.

Running out between the wickets

Run-outs continued to haunt India. It was more to do with the batsmen judgment than anything else. Kohli s wicket was his own undoing, too much haste as Rohit was clearly seen uninterested in the single.

Ajinkya Rahane, on the other hand would feel extremely unlucky. A single was there to be taken, but for a ball-watching Rohit Sharma.

Just when India were looking to launch an all-out attack, Ngidi ruined their party. He got rid of Rohit, Shreyas Iyer, Hardik Pandya and MS Dhoni. He ended with figures of 4 for 41.

Aiden Markram had a good start, but induced a leading edge and fell for 32. Then emerged Hardik Pandya and dismissed JP Duminy and AB de Villiers. David Miller then launched a counterattack. He bludgeoned two fours and a massive six, but that was that. Chahal knocked him over. Meanwhile, Amla combined traditional recipe and modern game and stitched a spectacular innings, which saw an array of strokes. He, however, was unlucky that Pandya inflicted a direct hit, walking back for 62 off 82.

After going for plenty in the fourth ODI, Kuldeep staged a comeback. He finished with figures of 4 for 57. With this performance, he also went past Michael Bevan and is only behind Brad Hogg in the list of most wicket-takers by a Chinaman. 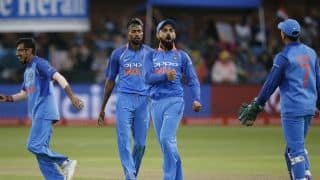 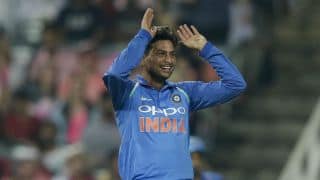