India vs South Africa ODIs: Marks out of 10 for Proteas

India vs South Africa ODIs: Marks out of 10 for Proteas

South Africa after winning the Test series, lost the ODIs 1-5 to India.

The ODI series between South Africa and India was expected to be a mouthwatering affair, but it turned out to be a damp squib. The hosts gave in to India s spinning prowess and were ransacked by Virat Kohli and co. across six matches. There were a few good performances from the Proteas, but were not enough to outclass their opponents. With this loss, South Africa are now at No.2 in the ICC ODI Team Rankings. Here are marks out of 10 for the South Africans in the series:

Hashim Amla (5/10; 154 runs): Mainstays of South Africa s batting, Hashim Amla did not have a desired outing against India. Jasprit Bumrah troubled him, in particular. It was strange to witness Amla struggle against Kuldeep Yadav and Yuzvendra Chahal.

Aiden Markram (4/10; 127 runs): Handed South Africa s reins in absence of Faf du Plessis, Aiden Markram mustered the team well. He got starts but did not convert it into big scores. His on-field acumen was commendable in fourth and fifth ODI.

Despite scoring just 62 runs in 3 ODIs, his strike-rate remained above 100.

Khaya Zondo (5/10; 96 runs): Asked to debut in a high-profile series is not easy. Despite a poor start to his career, Zondo was able to display his talent in parts. His gritty knock at Centurion was enough to ensure that the South African selectors need to stick with him in the future.

Heinrich Klaasen (6/10; 110 runs): Klaasen exhibited his batting as series moved forward. His approach against Indian spinners was a breath of fresh air. He was afraid to take the aerial route and use extravagant shots. He played a match-winning knock in the Pink ODI.

Chris Morris (3/10; 65 runs; 2 wickets): One expected Morris to shine at home, but sadly he did not live up to expectations. Morris, known to be a big-hitter of the cricket ball, found himself in pressure situations across all the ODIs. His bowling too was not inspiring.

David Miller (4/10, 107 runs): Miller showcased grit throughout the series, but that did not produce results in favour of South Africa. Miller s charge in the Pink ODI was the only highlight for him.

JP Duminy (3/10; 99 runs; 2 wickets): Back in the side after a decent outing in domestic season, JP Duminy did not impress much. His struggle against spinners was evident.

Faf du Plessis played the first ODI before getting injured for the remaining series. He scored 120.

Kagiso Rabada (6/10; 5 wickets; 17 runs): Kagiso Rabada did not produce a match-winning spell but did manage to shine in parts. He was aggressive and looked the most fearsome of all the South African bowlers.

Andile Phehlukwayo (4/10; 3 wickets; 87 runs): Phehlukwayo did wonders with the bat, but failed with in his main discipline; bowling. He managed just 3 wickets but was able to excite fans with his mighty hitting.

Imran Tahir (1/10; 1 wicket): Imran’s spin was of no worry against Indians. They milked him for runs with evening breaking a sweat. Tahir picked just 1 wicket. He was also involved in a off-field incident.

Tabraiz Shamsi (1/10; 0 wicket): Shamsi had a poor outing. He played 2 ODIs and bowled a combined of 13 overs without picking a wicket.

Morne Morkel (2/10; 2 wickets): Morne Morkel was expected to run past India’s top-order but that was not to be. He was good in parts but lacked his menacing best. He claimed just 2 wickets.

Lungi Ngidi (7/10; 6 wickets): After a splendid show in the Tests, Ngidi was called into the ODIs. He was instrumental in breaking India’s lower-order prowess with his tight bowling. Ngidi showcased good spells of death bowling to be South Africa’s leading wicket-taker. 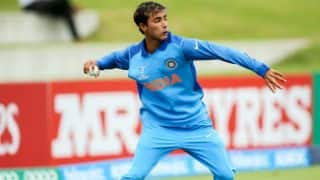 Securing spot in India national side not a piece of cake, says U-19 winner Abhishek Sharma