India were always expected to score heavily as none of their top-order batsmen were rested.

India and Sri Lanka resumed their rivalry with the first One-Day International (ODI) at Cuttack on Sunday, with the hosts producing an emphatic performance to outplay and register a huge 169-run win to take a 1-0 lead in the series. While India will be pleased with their show, Sri Lanka have a few questions to answer before the second game, says Devarchit Varma.

It was a match wherein the teams experimented with their playing combinations rather than looking solely at the outcome. Of course, winning always remains the primary objective but at this time when every single international team is looking at the ICC World Cup 2015, it becomes essential for the teams to test and see which players fit in their scheme of things and what they can do to get the right combination that can win matches for them in the near future.

Sri Lankan captain Angelo Mathews declared before the start of the series that his side would be giving chances to few new players. This got mixed results, as while Lahiru Gamage had a memorable outing in his first international game — his first over in international cricket was a maiden, he took a wicket, and then remained unbeaten at the end — there was also disappointment in the form of moving Seekkuge Prasanna up the batting order. However, it was not Sri Lanka’s experimentation that misfired, but their approach that hampered their chances of winning.

Sri Lanka did well with the new ball to keep the Indians tied up, but once Ajinkya Rahane and Shikhar Dhawan were away, there was no stopping them. Sri Lanka tried as many as eight bowlers but none who could stop the flow of the runs. Suraj Randiv took three wickets, but giving away as many as 78 runs in 60 balls doesn’t speak well for a frontline spinner who got a friendly track to bowl on.

India were always expected to score heavily as none of their top-order batsmen were rested. The Rahane-Dhawan opening combination is slowly gaining momentum, and India may not like to disturb it by getting Rohit Sharma as an opener in place of an in-form Rahane. If these two continue to score the way they have been in the next two ODIs, it can get even tougher for Rohit as well as the Indian management.

Suresh Raina got another valuable half-century, and Virat Kohli and Ambati Rayudu had a good outing with the bat as well. Overall, India would be pleased to have notched up a score in excess of 360, especially in absence of their hard-hitting batsmen such as MS Dhoni and Ravindra Jadeja.

Unfortunately for Sri Lanka, Upul Tharanga was all at sea right from the start of the innings. On a subcontinent wicket against a pace attack that is not rated highly in international cricket, Tharanga got hit on the body and was beaten couple of times. When Tillakaratne Dilshan was dismissed, Tharanga had managed only eight runs off as many as 31 balls. Dilshan’s early dismissal coupled with the high required rate saw the other batsman struggling as well.

Kumar Sangakkara and Mahela Jayawardene have been excellent servants for Sri Lankan cricket, but they need other batsmen to step up and do the kind of work that they have done for years. Sri Lanka are indeed blessed to have experienced batsmen in their ranks as they head into the World Cup to be played in Australia and New Zealand, wherein the presence of these two would be extremely beneficial and even help them in tough times. But that being said, winning is always team effort and Sri Lanka can get a lot better than what they are.

Holistically, it was an outstanding performance by India, who reaped the benefit of playing continuous cricket. Sri Lanka, on the other hand, looked like a side which hasn’t played much cricket. India batted well, but much to the surprise of their fans and critics, it was their pacers — Ishant Sharma, Varun Aaron and Umesh Yadav — who did the job for them rather than the slow bowlers. India out-batted, out-bowled and even out-fielded the Sri Lankans.

While India will be aiming to continue their winning momentum, Sri Lanka need to introspect and see if they can really afford a few losses or bad games in order to get their combination right. 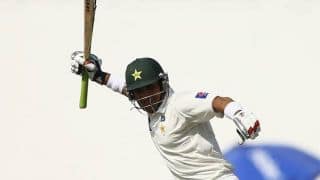 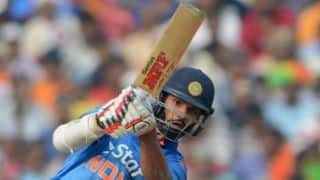