Rohit Sharma will become the 6th Indian captain to lead in T20Is during the series opener versus Sri Lanka.

“A day that I will remember for the rest of my life. Walking out with the team sheet for the first time was a feeling of its own which can never be measured or compared with anything,” stated Rohit Sharma after the conclusion of a successful maiden ODI series as skipper. Rohit will become the sixth Indian to lead in the shortest format in the series opener versus Sri Lanka. Barring Virat Kohli, the other four men Virender Sehwag, MS Dhoni (by virtue of a bowl-out), Suresh Raina and Ajinkya Rahane had gotten off to a winning start in their debut match as captain. Rohit will look to repeat the same in a format wherein teams share the balance given the nature of the game.

Indian selectors resorted to a new-look lineup for the three T20Is. The likes of Jaydev Unadkat, Basil Thampi, Deepak Hooda and Washington Sundar are expected to get a nod in a bid to bolster the bench strength ahead of the South Africa tour. While Unadkat and Thampi made a mark in IPL 2017 where Unadkat was the second highest wicket-taker Washington and Hooda have impressed in domestic circuit for a while. It will be interesting to see whether Rohit and co. make significant changes from the first game or accommodate them in the lineup as the series progresses.

Note: Kohli will again not be seen in the T20Is. Yes, it is a (welcome) change. Ask us, writers!

Without Shikhar Dhawan, Rohit will open along side KL Rahul. With Ravi Shastri making it clear that Dhawan and Murali Vijay will open in South Africa, Rahul may want to go all-out and display his T20 skills once again.

Manish Pandey and Dinesh Karthik will battle hard for the No. 4 spot. Shreyas Iyer will continue to bat at No. 3. In the bowling arsenal, Jasprit Bumrah will spearhead the attack along with the in-form duo Yuzvendra Chahal and Kuldeep Yadav. Sri Lankan batsmen have to learn to play them well in the middle overs and consolidate a good start.

Weakness: India’s pace battery looks weak in the absence of Bhuvneshwar Kumar. It will add pressure on Pandya. He will have to keep it simple and not be more predictable in the presence of the inexperienced Unadkat or Thampi.

Also, India do not possess a single left-handed batsman among their main batters.

From Sri Lanka’s perspective, they will have to thrive in crunch situations to come on top. They have thus far failed to impress barring the occasional blitz. What is most disappointing is that they are committing similar mistakes even though in transition.

Sri Lanka have it in them to put up a fight. In Upul Tharanga, they can expect a good start. Nonetheless, he will need company to shift gears swiftly. Also, Angelo Mathews will have to improve his strike rate to give a solid platform to Niroshan Dickwella, Thisara Perera, Kusal Perera and Asela Gunaratne.

In the bowling department, Akila Dananjaya is their best bet to strangle India’s young batting order. He will be accompanied by Perera and Mathews. They also have Dasun Shanaka and Nuwan Pradeep to pose some threat.

– 5 wickets needed by Perera to attain 50 scalps. He will become the 4th Sri Lankan and 21st overall to reach the landmark. However, six of these wickets came in ICC World XI.

“All of them have come with a lot of IPL experience behind them — some have played 20-30 games. They are not as perturbed as they used to be in earlier days. It gives them a lot of confidence to come into the international set-up” – Karthik on India’s young squad. 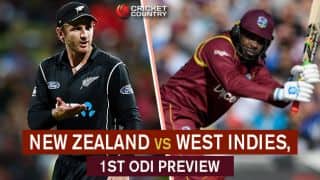