India would have a tough time selecting the perfect bowling attack against the strong Lankans.

With West Indies’ tour of India called off mid-way through the One-Day International (ODI) series, Sri Lanka have come to take on the hosts in a five-match contest. The first ODI is scheduled to be held at the Barabati stadium in Cuttack, and it will be interesting to see the combination fielded by the Indian side. Ayush Gupta takes a look at the possible XI for the first ODI.

Top order: Shikhar Dhawan and Ajinkya Rahane will doubtless open the innings, with stand-in skipper Virat Kohli coming in at No. 3. This series will be crucial for Dhawan, as the battle for the opener’s slot could heat up in the coming months with Rahane performing well and Rohit Sharma waiting for a comeback. A good performance in this series will confirm his ticket for the tour to Australia. After his poor run of form in India’s tour to England earlier this year, Kohli regained his touch against the West Indies. Another good performance in this series is sure to boost his confidence before heading Down Under.

Middle order: The middle order could begin with either one of Suresh Raina, who has been in a sensational form off late and can tear apart any bowling attack, or Ambati Rayudu, who has also been in decent form. Here is where it gets tricky. Usually, skipper MS Dhoni would bat at the key No. 6 slot, but here India would have to choose wicketkeeper-batsman Wriddhiman Saha at the slot. This will weaken India’s batting significantly, but with their options limited, Saha is the only man for the job. He proved while playing for Kings XI Punjab (KXIP) during the Indian Premier League (IPL) 2014 that he has some serious batting chops. This leaves the places open for all-rounders Ravindra Jadeja and Akshar Patel, who has been impressive in ODIs since his debut against Bangladesh.

Bowling attack: Unless India wish to go in with three seamers, which is unlikely at Cuttack, Ravichandran Ashwin could make the cut ahead of Amit Mishra given that he has not had much match practice for some time now. This leaves place for any two out of Umesh Yadav, Ishant Sharma, Varun Aaron, or Dhawal Kulkarni. Given his experience, Ishant ought to be one option, while Umesh could be the other.

Overall, there should not be any problem for the skipper with the top and middle order. However, he would have a tough time getting a perfect bowling attack against the strong Lankans. Looking at the general slow track of Cuttack, Kohli could go in with an extra spinner. 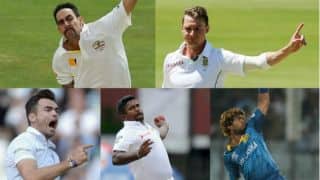