The second game will see another battle between Jayawardene and the spinners.

India and Sri Lanka head to the Sardar Patel Stadium in Ahmedabad on Thursday for the second One-Day International (ODI). India currently leads the five-match series 1-0 after winning the first game by a huge margin of 169 runs. The Indians aim to keep their intensity going, while the Lankans were seen practising hard before the game with hopes of levelling the series. Amit Banerjee takes a look at some of the contests between players from either side that are likely to develop during the course of the second game.

India was superior to Sri Lanka in every possible way in the first ODI at the Barabati Stadium in Cuttack. The hosts posted a huge score of 363 for five, courtesy a 231-run opening stand between Shikhar Dhawan (113) and Ajinkya Rahane (111), before the Indian bowlers wreaked havoc on the Lankan batsmen, dismissing them for a lowly 194. While the margin of victory is likely to be a major morale booster for the Indians, they cannot afford to take Sri Lanka lightly in the second game as the World T20 champions have the ammunition to strike back anytime, especially while playing in the sub-continent.

Following are some of the battles that one might witness between players from either team during the second game:

Suresh Raina vs Suraj Randiv: Raina is one of the better players of spin in the Indian team and was as such faring well against the Lankan attack, scoring 52 runs from 36 balls. He eventually fell victim to a Randiv‘s delivery. Randiv eventually finished on figures of three for 78 from his stipulated 10 overs. Both will aim to get the better of each other in the second game as well.

Kumar Sangakkara vs Ishant Sharma: Sangakkara had begun attacking pacers Varun Aaron and Ishant Sharma, scoring a boundary off each. Ishant however put the brakes on his innings before he could prove to be too dangerous for the hosts. The Lanky pacer finished with match-winning figures of four for 34. Sangakkara however, will not be let down by that dismissal, and will be expected to come down harder on the opposition pacers at Motera.

Dhawan/Rahane vs Prasad/Gamage: The India openers tore the Lankan bowling attack apart in the first one-dayer, putting up a massive 231-run opening stand, basically setting up the platform for the rest of the batting order for a big total. The opening bowling duo of Dhammika Prasad and Lahiru Gamage however were fairly well against Dhawan and Rahane, giving away 43 runs from the first 10 overs at a miserly rate of 4.3 per over. The bowlers could have even ended the partnership at its infancy as Prasad enticed Dhawan to play an out-swinger when the latter was batting on 10, resulting in the batsman edging the ball to wicket-keeper Sangakkara, who could not hold on to the catch. 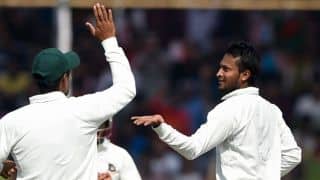 Bangladesh 2/0 against Zimbabwe at lunch on Day 2