India won the match convincingly by 7 wickets, clinching the series 3-0 in the process.

India beat Sri Lanka by six wickets in the third One-Day International (ODI) at the Rajiv Gandhi International Stadium in Hyderabad on Sunday. The ruthless Indians clinched the five-match series 3-0 in the process. Sri Lanka set a target of 243, which was overhauled by India with 35 balls to spare. Nishad Pai Vaidya selects some of the key moments from the game.

Umesh Yadav’s early burst: Yadav started off in great style. He was working pace and hit the right line and length to trouble the batsmen. Kusal Perera got a thin edge through to the wicketkeeper as a ball went past him a little outside off-stump. Kumar Sangakkara was dismissed off a similar delivery, but he got more bat onto it and was caught at first slip. Umesh bowled in the right areas and was difficult to deal with.

Mahela Jayawardene-Tillakaratne Dilshan’s stand: The two stalwarts were left with the task of pulling Sri Lanka out of early trouble. Both batted quite sensibly and helped Sri Lanka recover. Dilshan was more circumspect than usual as he scored 53 off 80 balls. Jayawardene was more positive and deftly placed the ball around the field to keep the scoreboard ticking.

Akshar Patel’s powerplay: With Jayawardene and Angelo Mathews in the middle, Sri Lanka opted for the batting powerplay after 30 overs. However, that plan backfired as Akshar Patel troubled them with his accurate bowling. In the powerplay, Sri Lanka scored only 16 runs and lost three wickets. Mathews was dismissed when he got the top edge while swinging across the line. Ashan Priyanjan hit one to mid-on and Chaturanga de Silva was caught at cover.

Mahela Jayawardene’s ton and the late assault: Jayawardene got to his ton in style as he swept Akshar for a six over mid-wicket. Towards the end, he played some good strokes and put together a brisk partnership with Seekkuge Prasanna to take Sri Lanka past 200. They eventually scored 243, which looked unlikely after they had faltered in the powerplay.

India start well: Ajinkya Rahane and Shikhar Dhawan were in control yet again. It didn’t look as if they were taking any risk, yet they managed to score 62 in 12 overs, before Rahane lost his wicket. There were times when a few edges went through for fours, but they were largely in control of the proceedings.

Ambati Rayudu run-out: Ambati Rayudu continued from where he left in the second ODI. He was playing confidently and had worked his way to 35. However, he was dismissed when he pushed one to mid-on and ran without looking at his partner. By the time the throw reached the wicketkeeper, both batsmen were on the non-striker’s end. This was perhaps the only blemish in India’s clinical performance.

Shikhar Dhawan misses out on a ton: Dhawan was in command of proceedings. After the game, he did say that he was calm in the middle. However, an innings of 91 off 79 balls wouldn’t say that. Dhawan was attacking the opposition bowlers, playing quite a few strokes freely in the process. The one that stood out was when he charged to a fast bowler and smashed him down the ground. However, he was unfortunate to be dismissed for 91 as he missed a short one from Nuwan Kulasekara. The ball had missed everything, yet the umpire ruled him out.

Virat Kohli breaks record: Virat Kohli celebrated a special occasion in this game. When he got to his half-century, he became the fastest to 6,000 runs in ODIs. He went past Viv Richards in the process and it took him five lesser hits in the middle to get there. Kohli looked positive through the day and dominated the bowling. 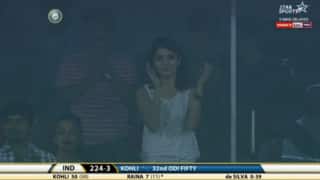