Mahela Jayawardene and Tillakaratne Dilshan however, saved some grace for the Lankans.

India and Sri Lanka head into the fourth game of the five-match One-Day International (ODI) series that is set to be played at the Eden Gardens in Kolkata. India are currently on a roll at the moment, leading the series 3-0 after a six-wicket win at Hyderabad, and will look to pile further misery on the visitors. Sri Lanka are playing for pride and will look to make up for the mistakes committed during the tour. A couple of wins would help restore some confidence in the islanders ahead of the series against England as well as the World Cup. Amit Banerjee takes a look at Sri Lanka’s likely XI in the fourth game.

Top-Order: After an improved top-order performance in the second game, the likes of Kusal Perera and Kumar Sangakkara failed miserably in the third one-dayer, departing for scores of four and zero respectively. Veteran batsmen Mahela Jayawardene and Tillakaratne Dilshan however, saved some grace for the Lankans with some fine hitting, scoring 118 and 53 respectively. Jayawardene’s knock formed the backbone of the Sri Lankan innings nearly half of his team’s runs. The top-order failures however needs a solution quickly, for it has the potential to ruin Sri Lanka’s run in the near future catastrophically. The Lankan team management might want to bring back Upul Tharanga with Kumar Sangakkara not playing the last two ODIs,

Middle-order: The duo of Jayawardene and Dilshan helped rescue Sri Lanka from seven for two to 112 for two. After Dishan’s departure, Jayawardene was left fighting to save his side’s innings all by himself as the wickets around him crumbled one after another. Skipper Angelo Mathews was dismissed for 10, while Ashan Priyanjan and Chaturanga de Silva both departed on scores of two. Its too early to write the captain off, especially after his all-round efforts in the second game in which he missed out on a century and finished as one of Sri Lanka’s most economical bowlers. The Lankan think-tank need to give an opportunity to the untested Niroshan Dickwella, who has shown the potential in the past to stabilize the middle-order. de Silva would probably be the most likely sacrifice.

Lower-order/Bowling attack: Seekkuge Prasanna, Nuwan Kulasekara and Thisara Perera were economical in their bowling, with Prasanna being the only bowler among the three to not take a wicket. Lahiru Gamage turned out to be a disappointment, conceding 50 runs from his spell of six overs without taking a wicket. Dammika Prasad can be considered for the fourth ODI. 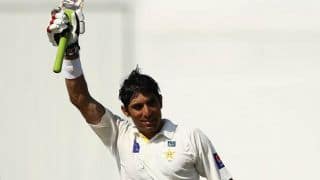 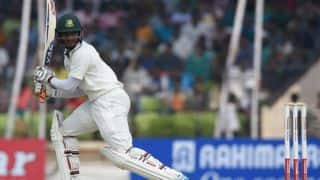 Bangladesh vs Zimbabwe, 3rd Test at Chittagong, Day 2: Shakib Al Hasan gets to his half-century