India have a chance to win a series in the island nation for the first time since 1993.

India take on Sri Lanka in the third and final Test at the Sinhalese Sports Club on Colombo, starting Friday. The series is levelled at 1-1 with both India and Sri Lanka showing their mettle, and the series decider promises to be yet another enthralling contest. Ayush Gupta takes a look at the Indian team’s composition for the last Test, as India have a chance to win a series in the island nation for the first time since 1993. LIVE SCORECARD: India vs Sri Lanka, 3rd Test at Colombo

Top Order: With a perfect start required from the top order in the batting line-up, it is highly likely that Cheteshwar Pujara would come in as the opener, following Murali Vijay’s hamstring injury that has knocked him out of the final Test. Pujara would followed along with his opening partner, KL Rahul, who has had a decent performance in the series so far, scoring a century in the previous game. At third down will be Ajinkya Rahane, who looked comfortable at No. 3 in the second Test, scoring a century. KL Rahul could do a Rahul Dravid and help balance the side by keeping wickets for India

Middle-order: The middle-order has to start with the skipper, Virat Kohli. Although, he should be comfortable batting at any position in the middle-order, however, it has been noted of late that the No. 4 has been quite a challenging spot for him, as it included a century in the opening Test at Galle. Kohli had a good outing in the second Test when he scored 78 in India’s first innings and formed a crucial partnership for the third wicket with Rahul, reviving India from a position of trouble. India were 12 for 2 when Kohli walked out and added 164 runs to take their side to a position of command. Kohli is likely to continue batting at No. 4 as he is the man who loves to play with challenges. He is to be followed by limited-overs opener, Rohit Sharma, who has been playing fairly so far in the series. But, Rohit would need a big score that would help him to settle his sport for the future. At No. 6 is the wicketkeeper-batsman, Naman Ojha would is likely to make his Test debut, following the unfortunate exit of Wriddhiman Saha after suffering a hamstring injury in the second Test. Being a specialist wicketkeeper-batsman, a lot would be expected and depend on the debutante. The order ends with either of Stuart Binny or Ravichandran Ashwin, who both are more or less comfortable batting at No. 7. While Binny being an all-rounder has the most chance of making it to No. 7. What to expect from the Virat Kohli era of Indian cricket!

Bowling Attack: The bowling attack once again would start with either of Binny or Ashwin, followed by leg-spinner, Amit Mishra, who has had a brilliant time with the ball in this series so far, claiming 12 wickets and is once again expected to fire. The attack ends with the likes of pacers in the form of Ishant Sharma and Umesh Yadav. Ishant is currently going through a definite good phase and is bowling well comparatively as to what he was doing a couple of months back. For Ishant’s support, Umesh would be a perfect match as his sheer pace, if not completely, but more or less would be of good help to Ishant as well as the Indians in order to terrorise the Lankan batsmen.  The pitch is more likely to suit spin. Karun Nair might have to wait a bit longer to make Test debut 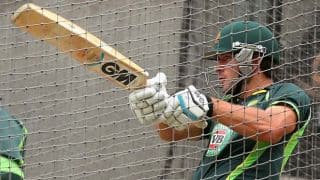 Australia score 100 against Ireland in one-off ODI at Belfast