India vs Sri Lanka 2015: 5 Sri Lankan cricketers to watch out

India vs Sri Lanka 2015: 5 Sri Lankan cricketers to watch out

Five players who will be crucial for Sri Lanka’s victory in Sangakkara’s final Test series.

India take on Sri Lanka in the first of the 3-Test series at Galle starting Wednesday. This will be one of the two Tests Kumar Sangakkara will play before hanging his boots. The hosts will look to bounce back after a poor series against Pakistan — thanks to some mesmerising bowling from Yasir Shah — and will be looking to make the most out of it. A lot with depend on how Sri Lankan bowlers tackle Indian batsmen, especially under the new regime of Virat Kohli. Sudatta Mukherjee picks five players who will be crucial for Sri Lanka’s victory in Sangakkara’s final Test series.

Angelo Mathews: The Sri Lankan captain has to play a pivotal role, not only as leader of the pack but also as leading batsman. With a Test batting average of 51.67 and someone who can provide necessary breakthroughs when needed, Mathews needs to push his game one notch up to help the young bunch of Sri Lankan cricketers. It will be his vision that will guide Sri Lanka.

Rangana Herath: Being one of Sri Lanka’s experienced players and one of the few remaining men from the 1990s, Herath will be play a crucial role against India. Indian batsmen have fallen prey to both Muttiah Muralitharan and Ajantha Mendis in the Emerald Isle in the past. Herath, who has a brilliant record at home, will be looking to put his recent bad form aside and cast a spin web on the young Indian batsmen.

Tharindu Kaushal: The youngest and latest sensation in Sri Lanka’s bowling line-up, Kaushal will be looking to continue his good form into the India series. He impressed with his five-wicket haul on debut against Pakistan, and was one of the few positives from Sri Lanka’s Test series against Pakistan.

Dhammika Prasad: It was against India in 2008 that Prasad made his Test debut, picking up eight wickets in the match. Sri Lanka won the match by eight wickets. However, it was his impressive five wickets in the final innings against England at Headingley in 2014 that transformed Prasad to the spearhead of the Sri Lankan attack. It was Prasad’s seven wickets in the second Test at Colombo which helped Sri Lanka win the Test against Pakistan. He was awarded Man of the Match not only for his bowling but his contribution with the bat too.

Dimuth Karunaratne: The 27-year-old was the top-scorer in the recently concluded Test series against Pakistan; he will be expected to continue his form. He scored 318 from 6 innings at 53 with a hundred and two fifties. His 130 in the first innings of the third Test was a saving grace. It will be crucial for Karunaratne score heavily in order for Sri Lanka to prevail over the current India squad. 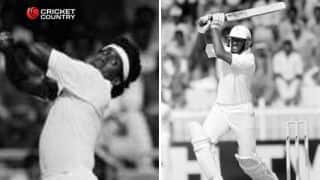