MS Dhoni now has 120 not outs in international cricket. He went past Muttiah Muralitharan after his priceless innings at Pallekele versus Sri Lanka.

5 consecutive tosses won by Virat Kohli across formats. He is yet to lose a toss on the current tour.

800 Sri Lanka‘s 800th ODI. They became the 4th side after India, Australia and Pakistan to reach the landmark.

99 stumpings for Dhoni in ODIs. He equalled Kumar Sangakkara’s record for most ODI stumpings. Danushka Gunathilaka became his 99th victim.

4/43 Jasprit Bumrah restricted the hosts to 236/8. In this process, he also notched up his third-best ODI figures. His previous best came against Zimbabwe.

236 Sri Lanka’s total was their lowest against India since 2008 at home despite playing the full quota of overs.

8.7 Rohit’s average against Sri Lanka in Sri Lanka after the second ODI. It was 7.4 before this game.

1 run was the margin by by which Dhawan missed his fifty. Had he got that run he would have emulated Javed Miandad by becoming the second to score 7 consecutive fifties against a single nation.

3,000 runs in partnerships between Rohit and Dhawan for the first wicket, in 63 innings.

100* Amidst the storm, Dhoni found an able partner in Bhuvneshwar Kumar. The duo added 100 runs for the eighth wicket, recording India’s highest partnership for the 8th wicket. The previous record was 84, between Harbhajan Singh and Praveen Kumar.

53* Bhuvneshwar registered his highest ODI score and brought up his maiden fifty as well. His previous best was 31 against England.

4 Indians have scored ODI fifties from No. 9. Bhuvneshwar became the 4th today. The others are Madan Lal, JP Yadav and Praveen.

120 not outs for Dhoni in international cricket. He went past Murali’s tally of 119.

16 This is Sri Lanka’s 16th defeat against India in the last 20 ODIs between both sides.

18 Sri Lankans have now won Man of the Match awards in ODIs despite being on the losing side. Dananjaya is the latest entry. 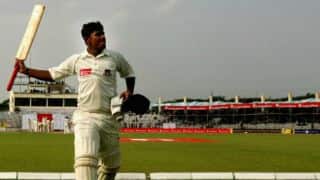