India overpowered Sri Lanka by six wickets and took a 2-0 lead in the series.

India overpowered Sri Lanka in the second One-Day international (ODI) played at Ahmedabad by six wickets and took a 2-0 lead in the series. Varun Arora looks back at the highlights of the encounter.

Tillakaratne Dilshan‘s boundary feast in 10th over:  Sri Lanka was 35 for the loss of one wicket after the end of the ninth over. The captain of the Indian team, Virat Kohli throws the ball to Ravichandran Ashwin for him to bowl the 10th over of the game. Ashwin takes few steps in and launches in a flighted delivery, Dilshan shimmied down the track and sliced the ball towards the covers boundary. The next ball a more loopy delivery, he gets down the track and hits it straight over Ashwin’s head for a boundary. Ashwin this time tries to bowl from around the wicket. The delivery is the same- loopy stuff- Dilshan is aware, sees the ball early and launches it in the same area. Ashwin tries something different now and this time Dilshan treats him with a sweep which again goes for a boundary.

Akshar Patel dismisses Dilshan in his first over: Dilshan had already spread glimpses of his attacking abilities in the previous over bowled by Ravichandran Ashwin. Local boy, Akshar Patel who was playing his first match in front of the local crowd had the ball in his hands. Dilshan collects two runs from the second ball and retains strike. He is ready to face the third ball from Patel. Patel comes in and bowls a flatter delivery at 90.7 kph and Dilshan in return tries to play a cut shot but has his stumps disturbed. The Gujarati boy is ecstatic.

Angelo Mathews’ fighting innings: Mathews came in at No.5 after the departure of Mahela Jayawardena.  This was going to be his first innings after he was adjudged the captain of ICC Test Team of the Year. There was something special about his innings at Ahmedabad. At the time when wickets kept flowing he held on his nerves and stood there on the wicket collecting runs for Sri Lanka. Mathews came to bat in 14th over and stayed till the last over of the innings. Although he missed out on his first ODI century but he did well for his unbeaten 92.

Shikhar Dhawan‘s artistic footwork: The early overs from Sri Lankan bowlers were challenging for the Indian batsmen. Dhawan managed to stay in the middle without losing his wicket. But when the time arrived, he was flawless with his footwork and full use of the freebies which were thrown at him. He completed his half-century with a fancy pull which just reached the boundary ropes in seconds. Although he was on course for a century but was dismissed for 79.

Ambati Rayudu’s first ODI century: Ajinkya Rahane had just departed to the pavilion. Everyone was expecting Virat Kohli but then turned up Ambati Rayudu at No. 3. Rayudu made strong steps towards the middle when the Sri Lankan bowlers were threatening the batsmen with pace and movement. He started slowly but made sure he was hitting the loose deliveries. His six off Suraj Randiv in the 17th over gave early signs of his form. Randiv bowled a regulation delivery and Rayudu came down and launched the ball into orbit. He played well for his unbeaten 121 runs and took the team to victory in 44.3 overs. 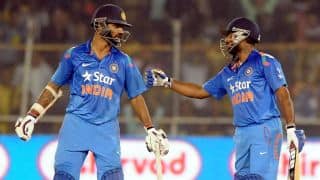