From 109 for no loss, India were reduced to 121 for 7 courtesy Akila Dananjaya's maiden five-for.

After the 9-wicket rout at Dambulla, India seemed to be on course in the second ODI at Pallekele as well. The Indian bowlers, led by Jasprit Bumrah, did their bit, reducing Sri Lanka to 121 for 5. Milinda Siriwardana and Chamara Kapugedara showed some spunk, but in the end Sri Lanka could only manage a mere 236 for 8. The target looked a mere formality for the strong Indian line-up, who had been dominating the Sri Lankan attack throughout the series. With Shikhar Dhawan, Rohit Sharma, and Virat Kohli all in excellent form and KL Rahul, Kedar Jadhav, MS Dhoni, and Hardik Pandya to follow, the sub-par target seemed to be a cakewalk.

It rained at the interval, robbing 3 overs of the match. India now had to score 231 in 47 overs, and Dhawan and Rohit switched on their picnic mode. Runs came with ease. Lasith Malinga fell apart in his initial spell. Neither Vishwa Fernando nor Dushmantha Chameera got going. And at one point India needed 122 runs in 183 balls with all 10 wickets in hand. Then they ran into Akila Dananjaya a man who has played 3 ODIs in 5 years for 5 wickets. He didn t even have a List A five-wicket haul before tonight. Here is how things unravelled:

Rohit Sharma: Dananjaya had conceded 17 off his first 2.2 overs. Then he bowled a straight, flat one that Rohit tried to sweep but missed. He consulted with Dhawan and reviewed, but to no avail. Sri Lanka finally broke through.

Shikhar Dhawan: Dhawan fell at the other end, to Angelo Mathews Siriwardana. Dhawan went for the sweep and top-edged, and Mathews plucked the ball out of thin air at short leg. Did the catch boost the Sri Lankans?

Kedar Jadhav: Kohli had promoted Rahul at 3 and Jadhav at 4, presumably to provide them with some much-needed batting practice. It did not work. The gap between Jadhav s bat and pad was more than sufficient to let a Ferrari pass, let alone a well disguised googly.

Virat Kohli: Kohli began in characteristic style, pulling the first ball he faced for four. Dananjaya tossed up the next ball. Kohli went for that cover-drive, but just like Jadhav, had left a massive gap between the bat and the pad. The googly did the rest.

KL Rahul: If there is a phase called too many googlies , Dananjaya has almost certainly not come across it. After Dhoni managed a single, he tried another one. Rahul s technique made sure that the gap was not as huge, but this time it brushed the pad and hit timber. Dananjaya had taken 4 wickets in 9 balls, but there was more to come…

Hardik Pandya: There was a quiet over from Siriwardana before Pandya came face to face with Dananjaya. Pandya had launched into the Sri Lankan bowlers time and again during the Test series, but this was not his day. Dananjaya tossed one up. Pandya backed his instincts and stepped out. Unfortunately, just like some of the top-order batsmen, he had left a massive gap between his bat and pad, and was stumped by a mile. Dananjaya had taken 5 in 13…

Akshar Patel: Dhawan was the only top-order batsman to have escaped Dananjaya. He was also the only left-hander of the lot. There was reason for Akshar to be confident. He did manage a couple of twos and was caught off the pad before a straight ball from Dananjaya hit him on the pads. At this stage Dananjaya s spell read 3.3-0-13-6.

He was taken off 2 overs later. Unfortunately, when he came back, it was too late. It was almost certainly a tactical error by Upul Tharanga. 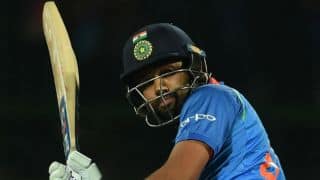