Sri Lanka's batting flopped yet again as India bundled their neighbours for 205 and 166 in the two occasions while they themselves had put up a gigantic 610 for 6 decl.

India won the Nagpur Test by an innings and 239 runs. Sri Lanka‘s batting flopped twice as India bundled out their neighbours for 205 and 166 after putting up a gigantic 610 for 6. Here are the marks out of 10 for both teams based on their performances. The players have been rated on a scale of 1 to 10, where 10 is the highest.

KL Rahul -2: Though Rahul has maintained consistent form in his Test career, he got out in poor fashion here. India are facing a tough time to choose between three in-form openers and all three of them have very little room for error.

Cheteshwar Pujara 7: While Vijay tried boundaries and lofted shots, Pujara remained grounded and played more of defensive cricket. He anchored India’s innings, staying at the crease through Rahul and Vijay’s dismissals. One may argue that he could have accelerated…

Virat Kohli 10: No mark can be taken away from Kohli. He scored a double hundred, rotated his bowlers well, and fielded brilliantly. He was perfect in all of his avatars in the match.

Ajinkya Rahane 3: Rahane s poor form continued. It is not good news for three reasons: first, India have a rich pool of domestic players; secondly, India will play five batsmen; and thirdly, he failed on an easy wicket. Time may be running out for him.

Rohit Sharma 7: Rohit, too, made a brilliant comeback. Playing in a Test after 13 months, Rohit scored the third hundred of his Test career and it came at the right time.

Ravichandran Ashwin 8: Ashwin broke many records as he picked up 8 wickets in the match. Few of his deliveries remained unplayable and outwitted the batsmen. He also reached his personal milestone of 300 Test wickets.

Wriddhiman Saha 5: Saha did not get much chance to bat but was effective behind the stumps. His batting cannot be marked as India had declared soon after Saha came out.

Ravindra Jadeja 6: With 5 wickets from the match, Jadeja played the perfect second fiddle to Ashwin. Jadeja found turn before Ashwin, proving he can be effective on any kind of pitch.

Umesh Yadav 4: Umesh Yadav bowled decent spells but bagged only a couple of wickets at his home ground. In absence of Mohammed Shami and Bhuvneshwar Kumar, India will want him to be a bit more effective.

Ishant Sharma 6: Ishant picked up 5 wickets in the match. Most importantly, he bowled intelligently and led the pace attack well when India needed him.

Sadeera Samarawickrama 2: Sri Lanka put a lot of faith on Samarawickrama looking at his First-Class average of 43.14 and sent him to open. However, it is never easy to play a strong team at their home with very little international experience. Samarawickrama was dismissed for 13 and a duck.

Dimuth Karunaratne 5: Karunaratne scored a crucial half-century in the first innings to save his side from a collapse but could not replicate it in the following innings.

Lahiru Thirimanne 2: Playing as one of the most experienced cricketers in the side, a lot more was expected off Thirimanne than 9 and 23. He got out in disappointing manner in both innings.

Angelo Mathews 5: Mathews, just like Karunaratne, scored a half-century in the first innings but failed in the next. He failed to score when his team needed him the most.

Dinesh Chandimal 7: Two fifties in the Test make Chandimal the best performer of the side. His decisions as a captain were also right most of the times, barring the review calls.

Niroshan Dickwella 4: Dickwella had shown a lot of fighting attitude in the previous match. However, he failed to make his performance speak for him this time. He gets 2 points for keeping wickets.

Dasun Shanaka 4: Shanaka, who plays as a bowling all-rounder, contributed with a single wicket. His spells were ordinary. With bat, he showed some fireworks in the third innings, hitting a couple of sixes and a four.

Dilruwan Perera 5: 3 wickets (for over 200 runs) and 15 runs were Dilruwan’s contributions in the Nagpur Test. However, comparing to his teammates, he has put up a decent performance.

Rangana Herath 3: Herath did take the wicket of Vijay but not before the latter had already scored a hundred. However, he went for a shade over 2 runs an over, preventing India from getting away

Lahiru Gamage 2: Chandimal showed a lot of faith on Gamage. Despite Suranga Lakmal performing exceptionally well in the first Test, Chandimal gave more overs to Gamage. Though Gamage bagged the first wicket during India’s innings, it remained his only wicket in the match.

Suranga Lakmal 3: After a career-best performance in the previous match, Lakmal failed to hold his consistency and went wicketless at Nagpur. However, his bowling was challenging for Indian batsmen. Also, he batted well with Chandimal in the third innings. 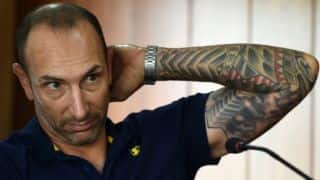