It has been too easy for India in this series against Sri Lanka.

It has been too easy for India in this series against Sri Lanka. Having won first two matches, India will now face Sri Lanka at Hyderabad on Sunday. This is a must win game for the visitors if they want to remain in redemption for the series win. Varun Arora looks at key battles for Sunday’s match.

Akshar Patel vs Tillakaratne Dilshan:  The young Gujarat boy has only played six One-Day International (ODIs) for India but has impressed everyone with both bat and ball. In the last ODI played at Ahmedabad which is also his home ground Patel gave away only 39 runs and also picked two wickets for the team. His first victim was Dilshan who had hit Ravichandran Ashwin for four boundaries in previous over. Dilshan had escaped the first two balls and was dismissed on the third ball of Patel’s over. Patel steamed in a flat arm ball which just rolled past Dilshan’s willow and hit the wickets as he tried to nudge it away. It would be interesting to see how Dilshan plays Patel at Hyderabad.

Mahela Jayawardene vs Ravichandran Ashwin: Mahela Jayawardene was done by Ashwin’s flighted delivery as he tried to flick it but handed a regulation catch Ambati Rayudu at deep midwicket. Jayawardene is one of the better players of spin bowling in the Sri Lankan line-up. He has all the cheeky shots in his cricketing armoury but at Ahmedabad he would be unhappy with his shot selection. This interesting battle will again light up at Hyderabad as the two teams meet on Sunday. Ashwin will bring all his variations to bowl whereas Jayawardene will be ready to face them.

Ishant Sharma vs Kumar Sangakkara: Ishant Sharma was phenomenal in the first ODI at Cuttack. The tennis ball bounce, the energy plus the movement he generated was so good to watch. Sharma bowled one gem of a delivery to Sangakkara in Cuttack. It was a good length delivery which just shaped away from Sangakkara after kissing some part of his willow. However, at Ahmedabad Sharma was not at his best with the ball as he went away for 58 runs and also didn’t got any wicket but Sharma is one fast-bowler to watch out for. It will be an interesting to a battle between a batsman who just clocked his 87th ODI half-century and a bowler who is inching towards a spot in the ICC World Cup 2015 squad.

Dhammika Prasad vs Ajinkya Rahane: Dhammika Prasad was difficult to get away in the early overs when Ajinkya Rahane and Shikhar Dhawan were batting at Ahmedabad. His disciplined bowling also gave him the wicket Rahane, the centurion from Cuttack. He bowled a full length ball outside off and Ajinkya Rahane in an attempt to hit it hard edged it. Rahane had played some 19 balls during his stay but could only manage eight runs. Rahane’s wicket at Ahmedabad would Prasad a look to confidence and it would be interesting to see how he bowls in the starting overs at Hyderabad.

Seekkuge Prasanna vs Suresh Raina: Seekkuge Prasanna was the only shining armour in the Sri Lankan bowling attack at Ahmedabad. He was a bit expensive but he went back with wickets of Shikhar Dhawan, Virat Kohli and Suresh Raina. The legbreak bowler would be an interesting ploy with Suraj Randiv in the bowling line-up. Raina’s casual approach cost him his wicket in the second ODI but Raina will want to tackle Prasanna well at Hyderabad. 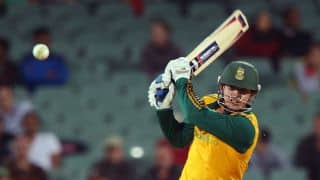