The inclusion of Kusal Perera in the last game did not turn out to be a very successful one.

India and Sri Lanka face off in the 3rd encounter of the ongoing five-match One-Day International (ODI) series at the Rajiv Gandhi International Stadium in Hyderabad. India are currently miles ahead of the Lankans, having won the second ODI by a clear margin of six wickets, chasing down a target of 275 with ease. The Indian juggernaut continues as the visitors keep searching for questions pertaining to their failure. The series however, cannot come to a verdict as yet as the Lankans are perfectly capable of a turnaround. Amit Banerjee explores the eleven players that Sri Lanka are likely to field on Sunday if they want to keep themselves alive in the series.

Top-Order: The inclusion of Kusal Perera did not turn out to be a very successful one, with the dashing opener falling for a duck in the second game at Ahmedabad. Sri Lanka were once again denied of a strong opening partnership, losing their first wicket for mere four runs. The Sri Lankan think-tank is unlikely to drop him after a solitary game, given his penchant for going for the offensive early into the innings and for having led the Lankans off to a good start on so many occasions. The duo of Tillakaratne Dilshan and Kumar Sangakkara contributed with valuable knocks of 35 and 61, and as such helped Sri Lanka recover from the early blow. Mahela Jayawardene however, would be disappointed with his getting out on a paltry score of four, especially after missing out on a half-century in the first ODI at Cuttack. The top-order thus, would consist of the likes of Perera, Dilshan, Sangakkara and Jayawardene.

Middle-Order: The middle-order showed a much better performance in the second game than in the first one, where they were a part of a collapse. Skipper Angelo Mathews, unbeaten on 92 at the end of the game, formed a 90-run partnership with Sangakkara. The presence of Seekuge Prasanna and Ashan Priyanjan did not really matter to the Lankans as they departed without contributing much. The Sri Lankan management would be quite tempted to replace Priyanjan with Niroshan Dickwella, who showed the traits of a rock-solid middle-order batsman in the series against Pakistan earlier in the year. The middle-order is most likely to consist of Mathews, Prasanna and Dickwella.

Lower-Order/Bowling Attack: It is the bowling that has time and again which has played the villain for the Sri Lankan fans in both ODIs. While the Indian batsmen have been exceptional in this series, with Ambati Rayudu scoring his maiden ODI ton in the second ODI, while Shikhar Dhawan (113) and Ajinkya Rahane (111) , scored a century each in the first ODI to take India off to a 231-run opening partnership, the Sri Lankan bowling has looked clueless in both ODI. The skipper and management need to take an urgent decision on the likeliness of Thisara Perera playing in the third ODI. Perera has not shone with the bat in either games so far, and has been atrocious with the ball as well. Dammika Prasad was the most expensive among the bowlers, with an economy of eight, but he managed to redeem himself with a wicket. The management therefore could go for the option of Nuwan Kulasekara in place of Perera. 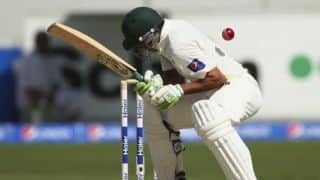