3 India‘s victories on trot at Pallekele. All have come against Sri Lanka.

100 catch across formats for Rohit Sharma when he pouched Kusal Mendis. He became the 16th Indian to do this.

31 innings needed by Angelo Mathews to amass 1,000 ODI runs versus India. Of Sri Lankans, only Kumar Sangakkara (29) and Mahela Jayawardene (30) have reached there earlier.

1st five-wicket haul for Jasprit Bumrah in ODIs now. His 5/ 27 are the 4th-best figures by an Indian against Sri Lanka. Ashish Nehra (6/59) heads the chart.

1st Hundred for Rohit on Sri Lankan soil. Overall, it is his 12th ton.

8 Indians have scored more ODI runs for India than Rohit. He went past Suresh Raina (5,568).

3 Indians have scored more ODI runs than Dhoni. He went past Mohammad Azharuddin (9,378).

1 Dhoni edged one delivery during his innings – every other shot was controlled.

72 not outs for Dhoni in ODIs, the joint most. He is at par with Chaminda Vaas and Shaun Pollock. 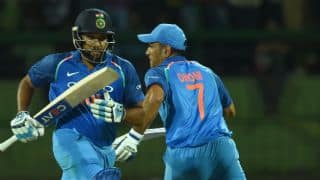