India have won 19 and lost 18 encounters in R. Premadasa Stadium, Colombo. On the other hand, Sri Lanka have a staggering win per cent (61.53) at this venue.

19 wins for India at R Premadasa Stadium, Colombo in 41 matches. They have lost 18. On the other hand, Sri Lanka have a staggering win per cent (61.53) at this venue.

72 not outs for Dhoni in ODIs, the joint-most by anyone. Dhoni is at par with Chaminda Vaas and Shaun Pollock.

4 wickets needed by Bhuvneshwar Kumar to reach 50 overseas wickets. He will, however, become the slowest Indian pacer to achieve this feat. He has 46 wickets from 72 overseas games. The four wickets will also make him India s 25th highest wicket-taker in ODIs.

32 more runs for Kusal Mendis to become the 3rd-fastest Sri Lankan to amass 1,000 runs at No. 3. He has batted at the position in 29 innings.

1 stumping needed for Dhoni to reach the 100-mark in ODIs. He will become the first to reach there. He also has 278 catches.

101 needed by Kohli and Shikhar Dhawan to surpass 2,000 runs as a pair. They have batted together in 35 innings so far.

84 needed by Rohit Sharma and Dhawan need 84 runs to surpass Dhoni and Yuvraj Singh (3,103) to become the 7th-most successful Indian batting duo in ODIs. The current opening pair has scored 3,020 runs together in 64 innings. Kohli and Rohit are at the 9th spot (2,811).

25th Dhoni-Kohli need 59 runs to overtake Rahul Dravid and Virender Sehwag (1,416) as a pair. They will become the 25th most successful Indian batting pair (ODIs).

5 ODI captains for Sri Lanka since 2016 now. Lasith Malinga will be the fifth, after Angelo Mathews, Upul Tharanga, Dinesh Chandimal and Chamara Kapugedera.

3 captains for Sri Lanka in the ongoing series. Tharanga and Kapugedera have both been ruled out, which means that even if Malinga does not play Sri Lanka will have three captains. They have had 3 captains only once in a series or tournament in Asia Cup 1988. The captains were Ranjan Madugalle, Arjuna Ranatunga and Ravi Ratnayeke.

3 catches needed by Kohli to surpass Yuvraj Singh (93) and grab the 8th spot in the all-time ODI list for India.

73 runs needed by Dhoni to surpass Mohammad Azharuddin (15,593) and become the 5th-highest run-getter for India across formats. 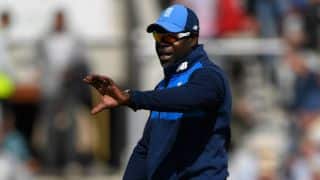