This is Sri Lanka's 18th defeat versus India in the last 22 encounters.

13 ODI centuries for Rohit Sharma. While it is his fastest, it is also the second-lowest of his hundreds.

29 ODI centuries for Virat Kohli. He surpassed Sanath Jayasuriya (28) and is behind only Sachin Tendulkar (49) and Ricky Ponting (30). Kohli is also the fastest to 29 hundreds. He reached there in 185 innings, way quicker than Tendulkar (265) and Ponting (330).

24 scores in excess of 350 for India, the joint-most. They equalled South Africa’s tally. This is also India’s 97th total in excess of 300. Australia and placed second, with 95.

73 MS Dhoni now has most unbeaten ODI innings. He went past Chaminda Vaas and Shaun Pollock (72 each).

161 runs scored by Dhoni in the ongoing series. He is yet to be dismissed.

375 India’s total in the fourth ODI is their highest score versus Sri Lanka in Sri Lanka.

300 ODI wickets for Lasith Malinga. He became the 4th Sri Lankan (4th Sri Lankan pacer after Vaas) to reach the landmark. Malinga also became the 3rd to achieve this feat while leading a side, after Wasim Akram and Shahid Afridi.

8 Sri Lanka’s rank in ODIs. Sri Lanka will almost certainly have to play the qualifiers for a place in the 2019 World Cup.

218 ODI caps for India now. Shardul Thakur is the latest.

13 wickets for Jasprit Bumrah in a series involving India and Sri Lanka, the most for an Indian. Bumrah surpassed Ajit Agarkar’s tally of 12. He also has joint-most wickets if one includes Sri Lankans as well: Ajantha Mendis had also taken 13.

18 defeats for Sri Lanka in their last 22 ODIs.

168 runs is Sri Lanka’s biggest defeat in terms of runs at home. 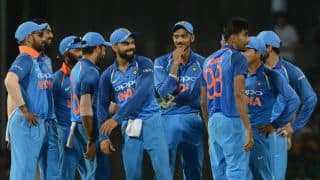