Men in Blue will be high on confidence after winning the India vs Pakistan tie will now be focused on defeating the defending champions Sri Lanka on Tuesday.

After all the excitement and tension in the air done and dusted after the much awaited India-Pakistan affair, now the men in blue will re-kindle their cricketing rivalry against defending Asia Cup champions Sri Lanka. Both these teams played a three-match Twenty20 International (T20) series last month with India winning the series 2-1. India did have a few hiccups versus Pakistan more so with Mohammad Aamer and Mohammad Irfan’s impeccable bowling early on. India, if they win the match against Sri Lanka, they will be assured of a place in the final of the Asia Cup T20 2016. Vishal Mehra, takes a keen look at how MS Dhoni and team India could look in the match in opposition to the Lankan Lions. FULL CRICKET SCORECARD:  India vs Sri Lanka, Asia Cup T20 2016, Match 7 at Dhaka

Top Order: Opening slot more of less will be the same with Rohit Sharma and Ajinkya Rahane coming out partner each other. Rohit did go for a precautionary x-ray on Sunday after he was hit by an Aamer toe-crusher. He in all likelihood could keep his  place, if Shikhar Dhawan is fully fit he could get in a look in.. Rahane will want to make good of the opportunity given to him by the team management, after Shikhar Dhawan was rested in the last match due to a niggle.  Rahane, who got out for duck in the match against Pakistan, will rely on his ability to play seam and swing bowling well this time around. Coming in at No. 3 will be Virat Kohli. Kohli can do no wrong in the big matches for India as he showed in the match against Pakistan. He will to carry on his batting form and get all set like a well-oiled machine before the ICC World T20.

Middle-Order: Suresh Raina, who was rather sloppy in his dismissal in the last match will want to refurbish his batting and spend more time in the middle rather than trying to hit himself out of trouble. Yuvraj Singh is a good example, which Raina can surely take cue from! Yuvraj looked completely out-of-sorts during his 32-ball stay in the middle, making just 14 runs (crucial). Most importantly he stood tall and devoid the bowlers to get a look in into the lower middle-order. MS Dhoni will take on the big hitter’s role in the team coming at No.6. Indian skipper will know that he needs to get into this hitting groove before the World T20 and provide the team with much needed acceleration. Dhoni might consider resting himself before the final on Sunday and give Parthiv Patel a game against UAE, if needed.

Lower-Order: Hardik Pandya has come in handy with both his bowling and batting in either of the matches India have played so far, will continue his run in the playing XI. Pandya has in both matches played a important role in the team’s success will look to gain more confidence. Ravichandran Ashwin will continue to be the lead spinner of the team, retaining his spot. Ashwin, hasn’t been used that much given the type of pitches. Pawan Negi, who was the surprise inclusion in the squad will want to get a look and prove his detractors wrong and could find a place in the squad in place of Ravindra Jadeja. Jadeja did manage two wickets in the last match against Pakistan will find it a welcoming rest after being on a match playing spree for India in the recent months.

Bowling: Ashish Nehra and Jasprit Bumrah, have done a commendable job in the bowling department, making early in-roads into the opponent’s team and controlling the flow of runs in the final overs. Nehra has looked as young as his own self from the early 2000’s, will look to keep his brilliant run with the ball going. Bumrah has been one of the find for India this season would like to continue his impressive show and gain the much needed play time.

Apart from a minor change— Ravindra Jadeja replaced by Negi — Team India is more likely to field an unchanged squad just to keep the momentum going. 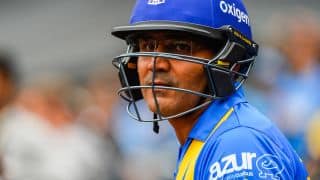