India and West Indies locked horns in a 50-over game after ICC World Cup 2015.

India moved on from their disappointing show in ICC Champions Trophy 2017 final and the ongoing Anil Kumble-Virat Kohli row, to commence their West Indies tour. The first of the five-match ODI series was played at the Port of Spain, but consistent rain led to no result, as only 39.2 overs of play was possible. Ajinkya Rahane and Shikhar Dhawan led India’s charge after Jason Holder-led West Indies opted to bowl on a two-paced wicket. The second ODI will be held at the same venue on Sunday. Let us walk through some key moments of this rain-interrupted game.

Kuldeep Yadav – India’s first chinaman: Rahul Dravid suggested India to look beyond Ravichandran Ashwin and Ravindra Jadeja post Champions Trophy. It was certain that Kuldeep Yadav would get a nod in the series opener. The 22-year-old became the first chinaman from India and the second Asian after Lakshan Sandakan to feature in limited-overs.

Rahane, Dhawan’s boring brand of cricket: Kohli often demands his side to play ‘boring cricket’ in order to remain consistent. Rahane replaced the rested Rohit Sharma and opened the innings along with Dhawan. The duo played with ease, struck boundaries at will and resorted to ‘boring brand of cricket’ to keep West Indies at bay. Hardly did they appear uncomfortable against any bowler as Holder’s men looked clueless for a breakthrough. The pair registered their fifth consecutive fifty-run stand and notched up the highest opening partnership for India on the Caribbean soil.

The partnership was studded with effortless strokes, well-timed cuts, drives and Dhawan’s trademark flick. Both openers got to their respective fifties as well (first such instance of Indian openers notching up half-centuries in West Indies).

However, one of the highlights of the stand was Rahane’s unusual 360-degree turn to avoid the ball from disturbing the stumps after blocking a delivery.

Incessant rain, a relief or misery? There is something about matches being held in West Indies. The atmosphere can put bloggers, spectators and even players off to sleep. It appears freakishly dull, to say the least. The stands remained empty (it must have had more spectators than people watching Salman Khan’s Tubelight). The happenings from the 22-yard had boredom written all over. As a result, I yawned probably 8 to 10 times (lost count) during India’s innings. To add to my woes, just when we were into the death overs with MS Dhoni coming into bat, rain made its presence felt and dominated proceedings from thereon.

Rain didn’t fade away just when Indian cricket team was about to launch the final onslaught in the death overs and raise the intensity of an otherwise quiet contest.

Hopefully, things will be different in the second ODI on Sunday. 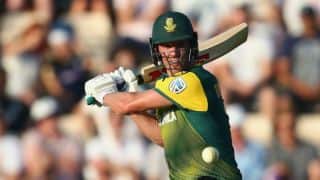