India dominated Day One of the first Test aka Sachin Tendulkar’s 199th Test. The Day’s top performer was undoubtedly Mohammad Shami who made a huge difference with the old ball in breaking the back of West Indies middle-order. Abhijit Banare looks at the key events and how the first day unfolded. India dominated Day One of the first Test aka Sachin Tendulkar’s 199th Test. The Day’s top performer was undoubtedly Mohammad Shami who made a huge difference with the old ball in breaking the back of West Indies middle-order. Abhijit Banare looks at the key events and how the first day unfolded.

Undoubtedly, he was the best player of the day. On debut, featuring as only pace option apart from Bhvneshwar Kumar, he could have been easily overawed by the situation. Yet Mohammad Shami stuck to his task and reaped rewards. He would have inched closer to a five-wicket haul had he snared a wicket more upfront. As former player and commentator Arun Lal pointed out, Shami was on the shorter side early in the innings and didn’t benefit from the fresh wicket. However, his spell with the old ball was an absolute gem. 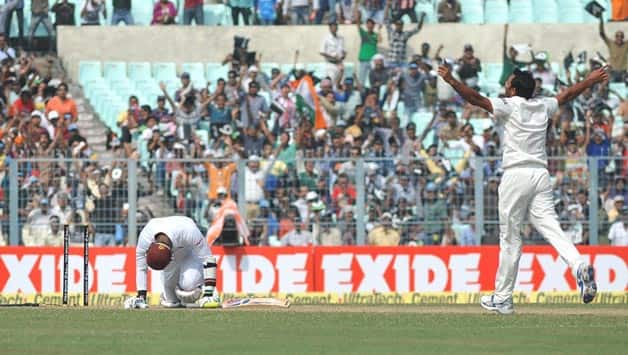 Marlon Samuels (left) was bowled for 65 by Mohammed Shami © IANS

The Jamaican batsman was way different from the others in the line-up. While others were stuck on the backfoot to the swing of Bhuvneshwar and Shami, Marlon Samuels was on the attack from the word go. Despite the uneven bounce in the dry wicket, Samuels backed himself by playing through the line. It was his attack which prompted Dhoni to introduce his second spinner early on. And even Ojha wasn’t spared. Samuels though eventually perished for the same reason he succeeded. He attempted a drive on the up against Shmai and the ball nipped back in sharply to take down his middle-stump. His 91-run partnership along with Darren Bravo ensured that West Indies had put forth a solid reply.

Bravo’s needless run-out was the turning point of the day. Samuels had already set the platform for a good first innings score. Both Bravo and Shivnarine Chanderpaul are quality batsmen who can defy any bowling attack with their solid technique. Perhaps at the end of the day Darren Sammy would wonder if that unwanted run-out was the difference between batting out the whole day and being bowled out for a below-par score of 234. Shortly after Samuels’s dismissal, Bravo nudged a ball on the leg-side and blindly set for a single. Chanderpaul at the other end was quite clear on refusing the tight run, but Bravo wasted a good start with that lapse in concentration.

Sachin Tendulkar back with his fox-like leg-spin

Which spectator would have hoped while walking into Eden Gardens to celebrate Sachin Tendulkar’s bowling instead of batting. All it mattered was one over before tea. More than the leg-before wicket of Shane Shillingford, it was a delight to see the maestro turning the ball like old days. The wrong one, faster one, orthodox leg-spin, the Little Master unleashed all of them accurately.

There were various other interesting aspects of the day. Ashwin’s delivery that held its line to disturb Chanderpaul’s stumps was a delight to watch. As they say, you require a special delivery to dismiss a special batsman. Bhuvneshwar’s catch running backwards to send back Kieran Powell too was a crucial wicket. And not leave out the banter between the commentators right from discussing Joel Garner’s all-round dimensions to pulling the leg of Ian Bishop early in the day. While the commentators enjoyed their, the Indians too haven’s missed their fun with a relatively relaxed last session to end the day on a high.