In the just concluded Test series played between India and West Indies, the hosts romped home by winning the series 2-0. Bharath Ramaraj with a bird's eye-view analyses India's performance. 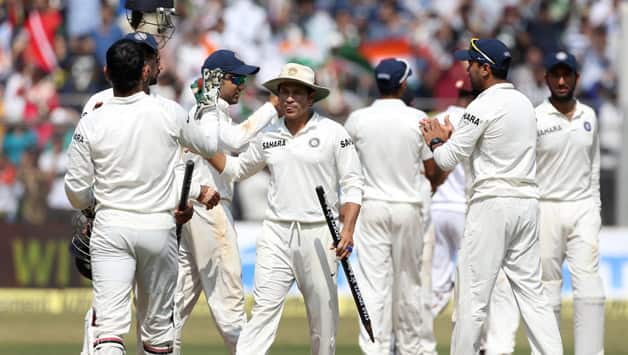 In the just concluded Test series played between India and West Indies, the hosts romped home by winning the series 2-0. Bharath Ramaraj with a bird’s eye-view analyses India’s performance.

When Calypso cricketers from the Caribbean came to the shores of India, the home team was expected to win the series. But it was a trifle surprising to witness a meek surrender from the opposition ranks and India winning the series convincingly 2-0. The Indian team though, won’t be complaining, as the home side can take a lot of positives from the series. A slew of younger players came to the party with resplendent performances and the baton has finally exchanged hands from the old-guard to the younger lot.

In this article, the writer intends to analyse India’s performance against the touring West Indies side in the just-concluded Test series.

In the first Test of the series played at Eden Gardens, two Test debutants, Mohammed Shami and Rohit Sharma hogged the limelight by shining like a beacon. Shami, who comes from a humble pastoral background swung the old ball both ways to take nine wickets in his first Test. At present, only Dale Steyn and James Anderson can proudly say that they have mastered the art of reversing it both ways with control. Shami in his debut Test itself swung the old ball both ways with control to leave the West Indies in tatters. A great achievement indeed. Some experts expectedly have gone overboard by comparing his ability to reverse the old ball with the great Waqar Younis. But he is certainly a pacer who offers plenty of hope to a nation starved of fine quickies.

The other debutant, Rohit, is a curious case in the sense that he had played over hundred One-Day Internationals (ODIs) before making his Test debut. Cricket pundits weren’t sure about his Test match temperament. But he allayed those fears by constructing a masterful innings with precise placement and exquisite timing. With an amalgam of iron-clad technique and dogged determination, he washed away the challenge of facing up to West Indian bowlers with aplomb. The way he essayed a pristine drive off off-spinner Shane Shillingford’s bowling when the score read 141 in the first innings of the Test, exemplified the essence of his graceful batsmanship.

Ravichandran Ashwin too penned with an indelible ink, a sparkling performance in the first Test. He didn’t take only five wickets in the Test, but also made his second hundred in Test cricket. Ashwin may not be able to sustain his current batting average of 40.52, but here is a cricketer who has a bright future ahead of him.

The second Test match played at the Wankhede Stadium in Mumbai was also Sachin Tendulkar’s farewell appearance in international cricket. The legendary batsman didn’t disappoint his millions of fans by transporting everyone to the bygone days of Tendulkar at his peak. By batting with glorious fluency and sheer perfection, he sent the crowd into a tizzy. In fact, the straight drive he played off Tino Best’s bowling was a shot of the highest-class. Even at the age of 40, he seemed to be running between the wickets like a jack-rabbit. Tendulkar also showed his gratitude to the 22-yard track on which he wowed the crowd with his magnificence by bending low to touch the surface, as a mark of respect.

Leaving aside Tendulkar’s emotional farewell, India’s think-tank can take heart from the fact that Rohit showcased he wasn’t a flash in the pan with another wondrous hundred in the second Test. He was a picture of calmness and serenity at the crease. Another fine batsman Cheteshwar Pujara yet again proved that he belongs to the top echelons of the game with his fifth Test hundred. The way he played late to cajole and convince the ball fine into gaps against West Indies’s lead spinner Shane Shillingford was a connoisseur’s delight.

In the bowling department, spin twins, Pragyan Ojha and Ashwin combined together to take 17 wickets between them to send West Indies packing to another crushing defeat by an innings and 126 runs. In fact, the writer believes that Ojha with the kind of ‘kick’ he gets from a track can be a threat on pitches away from home too.

On the downside, Murali Vijay couldn’t covert his starts into something substantial. Now, he has to prepare for the litmus Test of playing on South African tracks which are arguably the toughest test for any sub-continental batsman. Shikar Dhawan too struggled to make his mark.

Barring the minor blip of the openers, who incidentally performed the role of being the turbo-charged engines in the Tests against Australia, it was a series that would gladden the hearts of Indian supporters and the management. In the years to come though, the Test series would be fondly remembered for it being Master Blaster Sachin Tendulkar’s final appearance for India.