India vs West Indies 2014: Dwayne Bravo's side have to combat their spin conundrum to beat India

India vs West Indies 2014: Dwayne Bravo's side have to combat their spin conundrum to beat India

Figures show the West Indies have fared very poorly against spin from 2011 to 2014.

West Indies are not among the best when it comes to combating spin. They had a tough time against Amit Mishra in the game at Delhi on Saturday. To do well in the series the West Indies have to ensure that Mishra and company do not choke them writes Indrajit Dutta.

Marlon Samuels cannot get Amit Mishra away. He delivers two maidens. The pressure increases on the West Indies as they chase a stiff target of 264 set by India in the second One-Day International (ODI) at the Feroz Shah Kotla stadium in Delhi on Saturday.

The West Indies in  the end crashed to 215 all out from 170 for three and lost by 48 runs. The contribution of the two spinners Mishra and Ravindra Jadeja, along with Mohammed Shami’s four-wicket haul, played a huge role in India’s victory. The slow and low Kotla wicket aided the two spinners, but it was clear that West Indies were ill at ease when facing spinners.

Samuels’s uncertainty against Mishra meant that the West Indies fell behind the run-rate and ultimately were left with a lot to do as the overs went by. Interestingly even in the warm-up which West Indies played against India A where they were bundled out for 148 Mishra was the highest wicket-taker with three scalps to his name.

West Indies’ weaknesses against spin is not a recent development. In fact, barring Zimbabwe and Bangladesh, they have the worst record against spin among Test-playing nations. This bears a testament to the fact that they need to improve a lot. It comes as no surprise that their record against spin leaves a lot to be desired.

Another problem for the West Indies in this period has been a tardy rate of scoring against spinners.  As a team they have a strike rate of 40. For a team that has aggressive batsmen such as Chris Gayle, Kieron Pollard and Dwayne Smith the strike rate of 40 does not make for good reading. Only England, another side that has had problems with spin, have a worse strike rate (39).

Records of Some Currently Playing Bowlers against West Indies:

West Indies even in the nineties struggled against the premier spin bowlers of the decade. Shane Warne, Anil Kumble, Muttiah Muralitharan and Saqlain Mushtaq have very good records in One-Day cricket against the men maroon.

Records of the four spinners against West Indies:

One of the reasons why the West Indies came a cropper against Mishra was that they could not get him away. The surprising bit  was that Samuels, though reputed to be a good player of spin, remained stuck in his crease other than that one instance when he used his feet to hit a six. Mishra being able to stifle the batsmen meant that after point they were left with little choice but to go for it and as a result perished. Darren Sammy’s dismissal was an example.

In the game at Kochi the West Indies were able to dominate the bowlers. The spinners it is to be noted conceded 130 runs in 20  overs, the West Indian batsman went after them. Samuels made a superb 126 not out as Mishra was hammered for 72 runs in ten overs. Attacking him served the West Indies well.

For the West Indies if they are to win their first series in India since 2002 it is imperative that they do not let the Indian spinners stifle them. 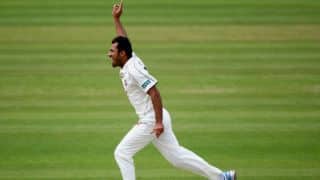 Ravi Bopara: I want to be one of the best players in that England side