Dhawan has experimented with a few shots which haven't been productive in the past few matches.

Shikhar Dhawan has had a mixed run in international cricket of late, having failed miserably in the Test series in England, and making a half-century in the first One-Day International (ODI) against the West Indies. Ayush Gupta opines the left-hander is not able to perform up to the potential because of experimenting a lot.

Shikhar Dhawan, with his attacking game, provided a relief to the Indian fans who always wished to have an ideal opening batsman who can destroy the best of the bowling attacks, something which Virender Sehwag used to do. Dhawan, who smashed 187 in Mohali on his Test debut, showed signs that he can fill in those huge shoes and the void that was there in the Indian set-up.

Dhawan enjoyed a tremendously successful run. His exploits in the ICC Champions Trophy 2013 in England proved that Dhawan had it in him to garner runs in overseas conditions as well. However, when the Indian team toured England early this year, Dhawan failed to impress and was even dropped from the final Test of the five-match series.

His poor run continued in ODIs as well, and it was only in the fourth match that Dhawan looked in his usual elements – blasting 97 to help India seal the series. The left-hander started off well when he smashed a fluent 65 in the first ODI in the ongoing series against the West Indies, but there are chinks in his armour.

Dhawan hasn’t looked as free-flowing as he was during the ICC Champions Trophy 2013. Although he has managed to score four fifties in the last 10 games, his form and batting style hasn’t been convincing, even at home.

The question is – how can he improve his form and get the free-flowing run that he carried for a long time? The fact that Dhawan has tried far too many things in context of batting style, may provide the answer. He has been trying to play new shots which are not a part of Dhawan gameplay. For instance, Dhawan is well-known for his straight-bat knock at the ball, through the midwicket or cover region, whereas nowadays, he is experimenting with the pull shot and even the sweep shot.

During the tour of England, in the second ODI at Cardiff, Dhawan was dismissed after he went for a powerful shot with almost a straight bat down the ground on an out-swinging ball that took the  edge, only to be caught behind by Jos Buttler. He went for a shot which was slightly against the turn. Had Dhawan hit the shot with a straight bat through the covers, he could have been safe and might have got a boundary as well. The third ODI at Nottingham saw him trying to cut a ball outside off stump and ended up giving a catch to Eoin Morgan at point. The Indian opener had mistimed the stroke.

However, in the fifth ODI at Leeds, he went for a sweep shot and ended up getting bowled by Moeen Ali. Once again, Dhawan was dismissed in a similar fashion in the first ODI at Kochi in the ongoing series against the West Indies, after trying to sweep the off-spinner, Marlon Samuels, and ended up getting his stumps disturbed. The dismissal in the next match was even more horrible – a Jerome Taylor delivery pitched right in line of the off-stump and hit the wicket as the batsman once again tried an unorthodox stroke – something which is certainly not in his books.

Even if Dhawan goes to experts and coaches to figure out what is wrong, they might suggest to him that it will be better if he sticks to his natural style of play.

Batsmen from the subcontinent are rated even higher and considered as different force all-together, if they earn success overseas. Dhawan has scored three out of five ODI tons outside the subcontinent, which indicates he has it in him to make runs on any kind of track. May be, it will be beneficial if he sticks with his natural game and not experiment. India cannot afford to have any of their batsmen going through rough patches anymore, as another tough tour of Australia is impending and so is the all-important ICC World Cup 2015. 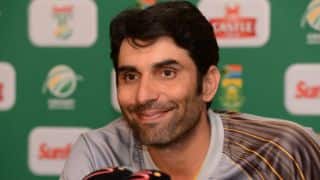 Misbah-ul-Haq will not be forced to quit as Pakistan captain, says Shahryar Khan