India vs West Indies 2014: Was Virat Kohli really out of form?

India vs West Indies 2014: Was Virat Kohli really out of form?

Kohli has been one of the leading batsmen in ODI cricket for quite some time now.

Much was said and written about Virat Kohli’s form — or lack thereof — after his failure in the first One-Day International (ODI) between India and West Indies. However, his crucial half-century in the second ODI came as a huge relief to him and his fans. But was Kohli really out of form? Shiamak Unwalla takes a look at his numbers and says otherwise.

Whether a batsman is in good or bad form is usually a matter of personal perspective. To say that a batsman who averages 46 in 2014 is in bad form might be a bit of a stretch. However, given that the batsman in question has a career average of nearly 51, it could be postulated that he is in less good form than he was a year ago. The batsman in this case is, of course, Virat Kohli.

Kohli has been one of the leading batsmen in ODI cricket for quite some time now. Since the ICC World Cup 2011, Asian batsmen have dominated the ODI run-charts, with Kohli being at the very top of the list:

Apart from having scored the most runs, Kohli has also hit the most hundreds by a long way, while his strike rate of 93.51 is behind only AB de Villiers (103.81) and MS Dhoni (95.25), while his average is third behind those same two men.

If one reduces the span to just the last year, the list undergoes a few changes, but Kohli remains at the top. Given below is the list of top 10 run-scorers in ODIs between October 1, 2013 and October 12, 2014:

Why, then, has Kohli been accused of being in poor form? He has scored runs in every series he has played in since the start of the year, with the exception of the series in England. Given below is a list of Kohi’s scores in every game he has played in so far this year:

As seen above, he had started the year with an excellent ton against New Zealand and had followed it up with a couple of half-centuries. In the Asia Cup that followed, he hit a ton against Bangladesh. It was only in the England series that he struggled for runs.

Kohli has been in superb form in ODIs by any parameter. He suffered one inevitable lean patch in England, but has been nigh flawless in every other series he has played since 2011. The only other exception was the three-match ODI series in South Africa late in 2013, but he batted only twice in that series, which was sandwiched between two productive stints against West Indies at home and New Zealand Down Under.

To say that Kohli has been in poor form in ODIs is entirely incorrect. He may have been exposed in the Test series in England, but ODIs are an entirely different ball-game. Kohli continues to stay near the top — if not at the very top — of the batting charts in ODIs. To think otherwise is to fall prey to the easy trap of listening to undue criticism. 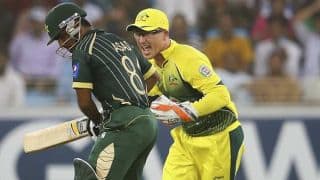