The first Test between India and West Indies at Antigua will quite obviously lay down the foundation for the rest of the series.

India‘s campaign in the Caribbean starts on July 21 as the first Test match between India and West Indies takes place at Sir Vivian Richards Stadium in Antigua. The first Test will provide both psychological and statistical advantage to the winning side for the four-match Test series. With a number of series to follow back home for India, this Test series will definitely be an important one for almost all players in the side. More than the players, it is important for the newly-appointed coach Anil Kumble to win the series to get a kick-start to his coaching stint with the Indian team. With a lot to look forward to, here is what India’s likely eleven can be in the first Test. FULL CRICKET SCORECARD: India vs West Indies , 1st Test match at Antigua

Top Order: India’s top-order, with KL Rahul and Shikhar Dhawan, had a fine start in the first warm-up game against West Indies Cricket Board (WICB) President’s XI. Rahul looks to be in fine touch since the ODI series in Zimbabwe. He has really impressed with the chances that he was provided. His technique is profound and he can also play big knocks. Dhawan, on the other hand, has a chance to improve his Test records with the series. If he can prolong his stay at the crease, runs won’t be difficult to find. He did score a fifty in India’s first warm-up game but failed in the second game. Nonetheless, this series will be critical for him to stamp his authority as India’s No.1 opener. Although, Virat Kohli in the press conference prior to the match indicated that Rahul might just have to wait for his chance. Murali Vijay however, is sure to start in the line-up. His average in Test cricket over the last few years has been impressive and his credentials as a opener cannot be questioned either. READ: India (IND) vs West Indies (WI) 2016, 1st Test at Antigua, Preview & Predictions: Domination on India s mind

Cheteshwar Pujara might continue to bat at the No.3 position. He also has looked good in the warm-up games, but he will have to improve his techniques a bit, given his tendency of getting bowled, which has been quite evident since the last few series.

Middle-Order: The West Indies bowlers will be in for a tough challenge against a strong Indian middle-order. India Test captain Virat Kohli has tons of runs behind him in the last few matches that he has played, more in the limited-overs format though. Kohli loves facing challenges and coming out victorious. He will be itching to lead the team from the front and contribute in his own way. He will also be looking to improve his Test records away from home.

Vice-captain Ajinkya Rahane would then follow him in the batting order. Both Rahane’s batting and fielding reflects class. He has been a mainstay in India’s Test batting line-up for quite a long time now. Composed yet brave, Rahane is perhaps one of India’s most dependable batsmen currently. Wicketkeeper-batsman Wriddhiman Saha might then come after Rahane.

Lower-Order and Bowling: All-rounder Ravindra Jadeja will probably be India’s next man-in. Jadeja had a fantastic outing in the second warm-up game. He picked up 3 wickets and also scored a fifty. Kohli can rely on him to produce wickets and also for his valuable runs down the order. Ravichandran Ashwin is likely to follow Jadeja in the batting order. Ashwin’s role will be crucial in the Caribbean as he is India’s top-notch spinner at the moment and definitely has ability and variations to back the claims. Amit Mishra is the other name that Kohli will depend upon if they plan to go in with three spinners, as the spinners ended up with the most wickets in the warm-up games. The pitches have also been on the slower side. However, among the seamers, Mohammed Shami and Ishant Sharma could lead the way. Both of them will have to find those early breakthroughs, so that the spinners can capitalize later. 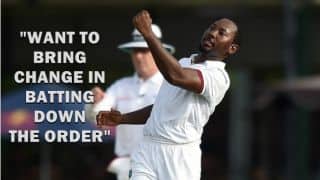 Jomel Warrican: Want to bring change in batting down the order