India's record at the Rajiv Gandhi Stadium stands at three wins and a draw from four Test matches.

Runs, runs, runs and then some more runs. From India s batsmen, that is, and in particular Cheteshwar Pujara who has racked up 500 in four Test innings at the Rajiv Gandhi International Stadium, venue for the second Test versus West Indies starting Friday.

And some wickets to R Ashwin, of course, given his tally at the ground stands at 24 wickets in three Tests at 15 runs apiece and a strike-rate of 36.4

The Rajiv Gandhi International Stadium at Uppal on the outskirts of Hyderabad has hosted four Test matches. India have won three of these, with the first Test at the venue a high-scoring draw in 2010 when New Zealand dominated on an utter flatbed with Brendon McCullum scoring a fantastic 225 when opening the innings.

When New Zealand returned two years later, MS Dhoni s team beat them in Hyderabad by an innings and 115 runs on the back of a Pujara century and 12 wickets to Ashwin. Batting first, India made 438 with Pujara (159), Virat Kohli (58) and Dhoni (73) the main contributors. New Zealand s first innings unfolded in a very different manner, with Ashwin taking 6/31 to bowl them out for 159. The follow-on enforced, New Zealand slumped to 164 as Ashwin added 6/54.

In 2013, India crushed Australia by an innings and 135 runs to go up 2-0 in a four-Test series that would claim 4-0 for the first time. Once again spin had a big role to play, with Ravindra Jadeja and Ashwin claiming six wickets each as Australia made 237/9 declared and 131 either side of India s 503 which saw Pujara get 204 and Murali Vijay 167.

Kohli opted to bat again, India set Bangladesh a target of 459 and bowled them out for 250. Ashwin and Jadeja each took four wickets.

Given the feeble nature with which West Indies folded in both innings of the first Test at Rajkot last week, the tone for Hyderabad will be set at the toss. If Kohli wins it, expect him to bat to give his batsmen more time to remain in Test-match mode given this is India s last Test before the first week of December when they meet Australia in Brisbane. 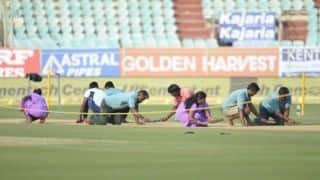