India vs West Indies 2nd Test: Why tourists did not win

India vs West Indies 2nd Test: Why tourists did not win

A win in the second Test slipped out of India‘s hand as West Indies batsmen stood their ground on Day 5. Everyone expected to be another win by an innings, but the match ended in a draw. Even if not a win by an innings, most considered second Test to be in India’s favor if rain does not interrupt play on Day 5. This would have been one of the rare instances, where India registered a win against a team by an innings two times in a row. But West Indies reciprocated everything they did wrong in the first Test and the first innings of second Test. They got a well-earned draw at the end of Day 5, with the help of Rain Gods watching their back. As the match ends with a draw Arun Rawal lays emphasis on factors that clinched a win out of India’s hands:  FULL CRICKET SCORECARD: India vs West Indies 2016, 2nd Test at Kingston

Cheteshwara Pujara’s slow innings: After a stellar bowling performance with Ravichandran Ashwin taking his third 5-wicket haul in a row, India were dominating West Indies once again, the weather forecast showed chances of rain on fourth day. Indian players knew they might lose a day’s play to rain. After settling in KL Rahul scored at a good pace but Pujara’s blockathon did not work for India.

Rain playing spoilsport: The weather forecast showed chances of rain on Day 4 and that is exactly what happened. Rain tried to play spoilsport at many instances resulting in loss of overs and less time for India to bowl West Indies out. After the match, India’s head coach Anil Kumble also expressed that losing 100 overs to rain was a setback for India.

Virat Kohli’s decision not to introduce Ravichandran Ashwin earlier: Despite Ashwin’s 5-wicket haul in first innings, he was introduced in 28th over. Kohli’s tactics of keeping Ashwin for later did not make any sense as he has traumatised West Indies batsmen in the series so far. Although, Roston Chase and Shane Dowrich did well to keep their wickets intact.

Roston Chase-led West Indies comeback: The above points would not have been the talking points of the game if not for West Indies’ comeback in their second innings. After losing 4 wickets for 48 it seemed like only rain is keeping India from another win by an innings. This was before Chase pulled off a Gary Sobers as he first contributed with the ball bagging a 5-wicket haul and then an unbeaten 137 to save hosts from a humiliating loss.

Chase shared a game-changing 97-run partnership with Jermaine Blackwood who got out after scoring another half-century. After that Shane Dowrich (74) and Jason Holder (64) ensured that Indian batsmen do not get through West Indies batsmen’s defence. A draw in second Test was a moral win for the hosts, as they keep the series alive, even if it happened with rain playing spoilsport. It would be apt to say that West Indies batsmen converted a definite loss into a well-deserved draw.

Spotted: A ‘Game of Thrones’ devotee at Galle 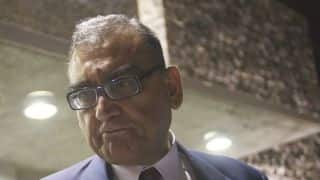