A good contest between bat and ball was witnessed with lots to take away for both the sides.

After a spirited performance by West Indies in drawing the second Test of the four-Test series against India, both  teams took on the field for the third Test at Darren Sammy International Stadium, St. Lucia. Jason Holder won the toss and invited India to bat. India struggled throughout the day to pile on runs as they were hard to come by but a late fightback led them to 234 for 5 at stumps. There were quite a few moments in the day’s play and Aditya Sahay jots down some of the most important ones from the day’s proceedings. Full Cricket Scorecard: India vs West Indies, 3rd Test match

Team India’s surprising team selection and needless change in batting line-up: Probably the most talked about point for the connoisseurs of cricket after stumps will be about India’s surprising team selection and, to add to that, their needless meddling in the batting line-up. KL Rahul deserved a place in the side but a once-again-fit, Murali Vijay was expected to feature in the Playing XI too. They dropped Cheteshwar Pujara and showed faith in the ever inconsistent, Rohit Sharma, who eventually got out for 9. Ravindra Jadeja and Bhuvneshwar Kumar also made their way into the team instead of Amit Mishra and Umesh Yadav.

The biggest mistake of Virat Kohli and co. was the needless tinkering in the batting line-up. Kohli came in at No. 3, instead of his usual No. 4 slot which moved Ajinkya Rahane from No. 5 to No. 4. The haphazard planning bore no result as they got off to an awful start with Shikhar Dhawan, Kohli and Rohit going out for less than 10 runs. Clearly, India went a step ahead by changing too much. LIVE: India vs West Indies 3rd Test, Day 1 Live Updates

Alzarri Joseph’s dream debut: West Indies handed out a debut to Alzarri Joseph. The decision proved to be a master stroke for them as he along with the fast bowlers were right on the money from their first spell itself. Joseph, in particular, bowled in the right areas and tested the Indian batsmen. He bowled well-planned bouncers and pitched the ball outside off stump. He was rewarded with the wickets of India’s Test skipper, Kohli and later got the wicket of Rohit, who edged the ball to the keeper to leave India in tatters. The rest of the bowlers also were disciplined as Roston Chase and Shannon Gabriel shared three wickets between them.

Rahul’s gritty half century shows his current form: The Indian opener got a chance in the second Test due to Vijay’s thumb injury in the series opener. He made the most of it by scoring a career-best 158. He was entrusted by the team management ahead of his senior pro in this match and despite the top-order crumbling, he stood the test of time. Rahul scored a valiant fifty and scored them quickly. He made 50 off 65 balls at a strike rate of 75. This showed the kind of form he is in when the others were finding the going tough. This is also the opener’s maiden score of 50 as earlier he has always converted a half-century into a three-digit score, but sadly he could not this time.

Ravinchandran Ashwin- Wriddhiman Saha’s unbeaten century stand: India were 87 for 4 when Ashwin came into bat. He was alongside Rahane, who had got a look-in by that time. Rahane held the innings well with India’s premier off spinner before bowing out for 35. It seemed as if the way Rahane played, rubbed on his partner. Ashwin took the mettle from thereon and began India’s revival with wicketkeeper-batsman, Saha. Both of them showed great resilience and patience as they took enough time and played the waiting game effortlessly. They made the West Indies captain rotate his bowlers and scored carefully. If India have sneezed back into the match, by a whisker also, this pair deserves all the accolades. As Ashwin grew in confidence with every stroke, Saha stitched out a patient innings of 46 not out to lend support to his partner. They have added 108 runs for the sixth wicket so far, with no damage done in the final session. ALSO READ: India vs West Indies: Fans vow to boycott Test at St Lucia following Darren Sammy’s sacking

The match is interestingly poised at stumps on Day One as the first two sessions belonged to the hosts but the last session fightback by the unbeaten pair of Ashwin-Saha have bailed India out of trouble, for now, at least. A good contest between bat and ball was witnessed with lots to take away for both the sides. 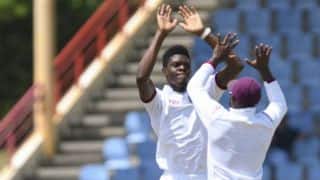