The match is totally in India’s favour and they would like to seal the series tomorrow by giving a competitive target to the home side and rattling their batting line-up.

Day Four of the third Test between India and West Indies ended with India truly on top of the visitors and look certain to go for a victory even after an entire Day Three’s play being washed out due to rain. A sudden collapse by West Indies have outdone them in a match where they looked like competing neck to neck with the visitors. The home team have only themselves to blame for their outrageous surrender in the match. At stumps, India were 1.. for 3, leading West Indies by 2.. runs. Here are some of the best moments of the day written by Aditya Sahay: Full Cricket Scorecard: India vs West Indies, 3rd Test match

An evenly poised first session: West Indies started off the day at 107 for 1, losing their opener, Leon Johnson before the stroke of stumps on Day Two. Kraigg Brathwaite and Darren Bravo were well settled at the crease as India tried to make early inroads. Bravo was removed by Ishant Sharma while Brathwaite got dismissed by Ravichandran Ashwin. Early jolts did but some brakes on the hosts’ scoring but Marlon Samuels and Jermaine Blackwood continued their side’s fightback and held the innings till lunch. The pair had added 50 runs together in adequate time and did not allow the Indians to get the upper hand by the end of the session. Full cricket updates: India vs West Indies, 3rd Test, Day 4

Bhuvneshwar Kumar triggers hosts’ drastic collapse: After lunch, West Indies would have wanted to carry on in the same fashion and get close to India’s score by tea. With six wickets in hand and a partnership settling in, they had their chances. But this was not the case to be. Bhuvneshwar was brought into the attack by Virat Kohli who bowled a lethal spell of swing balling, complimented by good line and lengths, and bowled ten overs on trot. He removed Samuels by balling three outswingers and then suddenly nipped one inside to confuse him as he played on.  He dismissed Blackwood and followed it up by removing Shane Dorwich and Alzarri Joseph to take a five-for in his comeback Test match. He has truly instilled life into a Test heading for a draw with his fierce and accurate spell.

India lose early wickets to return back the favour:  India took a huge lead of 128 runs thanks to Bhuvneshwar’s game changing spell and came out to bat. The approach was obvious that they will go after their bowlers once getting settled. India did get off to a good start with a 50-runs stand between openers, Shikhar Dhawan and KL Rahul, but the latter departed soon afterwards. He was followed by Kohli and Dhawan which dented their plan of scoring freely to set a target for West Indies. Ajinkya Rahane was joined by Rohit Sharma and they had to revamp their innings before going for the kill. Hence, the game’s topsy-turvy nature continued.

Rahane-Rohit stitch an unbeaten half-century stand: The duo got together in a tricky spot as they lead had just reached 200. India had seven wickets in hand but they had to rebuild because a collapse, like the West Indies innings, would have hampered their strategy. Rahane looked his usual best and held one end as Rohit took a few balls before going for the shots. The thinking was clear that Rahane would play around, if a collapse triggers, while others would go for the big ones. Rohit survived at times and miscued a bit but remained unbeaten on 41 by the stroke of stumps. Rahane reached another fifty and gave enough confidence to a shaky Rohit which bolstered his innings. Rohit’s three big hits out of the park also became the highlights of the unbroken partnership. ALSO READ: DAY 4, STUMPS: Rahane’s unbeaten fifty takes India’s lead to 285

The match is totally in India’s favour and they would like to seal the series tomorrow by giving a competitive target to the home side and rattling their batting line-up. Hosts’ inconsistencies and fragility has opened up this contest for the visitors and they will be eager in adding another series win under their belt. 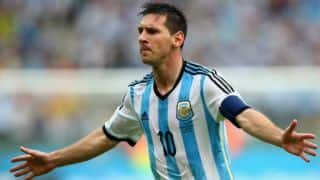 Lionel Messi to come out of international retirement 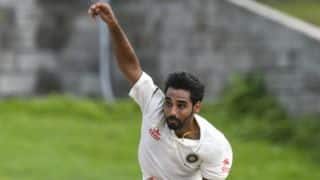