India were bowled out for 353 in their first innings, as they lost their last 5 wickets for just 14 runs on Day Two.

Ravichandran Ashwin and Wriddhimaan Saha, unlike other batsmen, scored runs with grace, making it look easier. After losing half their side for just 126 runs, it looked as if the visitors would fall well within the 200-run mark. But, the overnight pair continued with caution in the first session, not giving their wickets away and slowly finding rhythm. They were selective in their shot-making, addding 213 runs for the sixth wicket. However, once the partnership ended, India lost the remaing wickets like ninepins. It was a collapse that put them in a spot of bother and might even cost them later on. Full Cricket Scorecard: India vs West Indies, 3rd Test match

From 339 for 5, India succumbed to 353 all-out. They had lost 5 wickets for just 14 runs. The lower order had fallen like a pack of cards. Saha edged one to Shane Dowrich to give Alzarri Joseph his third scalp, after scoring a well-made 104. Then, Ravindra Jadeja, after waiting for a long time to bat in the dressing room, was dismissed on 6. Jadeja had a go at Miguel Cummins’ back-of-length delivery, nicking it to Dowrich, giving the West Indian his first wicket in Test cricket. Shannon Gabriel, then, banged in, as Bhuvneshwar Kumar handed it straight to the short-leg fielder.

Ashwin, perhaps, lost his concentration seeing the wickets tumble from the other end, as he holed out to Jermaine Blackwood, after scoring his fourth Test ton. Ishant Sharma soon joined joined his teammates in the pavilion. The innings had ended in a flash after lunch. (On a funnier note, it was almost as if India didn’t eat well at the lunch interval and were hungry for more, so they headed back quickly.)

The West Indies top order, with opener Kraigg Brathwaite, scoring a half-century did send out a loud message to India. The pitch looked much easier to bat on Day Two than what it was the first day, and therefore, some extra runs from the lower-order would have been highly valuable. But, will that batting collapse cost India that will remain to be seen. Also read: Does Virat Kohli’s 5-bowler policy veil India’s frailties?

Nonetheless, not that India were complacent, they, in fact, were done in by West Indies’ brilliance. For them to compensate the failure, they will have to make the second innings count, no matter what.

If India could have even added another 50 runs, not more, it would have done two things: first, it would have compensated for the early loss of wickets in the innings; second, it would have had a psychological impact on the hosts if India would have crossed 400. Well, the ifs and buts can be put aside for now. Also read: Perfect opportunity for Bravo, Samuels to strike form

The credit though cannot be taken away from the West Indies’ pace attack, which was rewarded for bowling a good line and length. However, there were times in the Indian innings when Ashwin and Saha had managed to frustrate them with sensible application, but West Indies came back strong, pounced on the window of opportunity and ripped apart the lower order. Pakistan vs England: Over dependence on Yasir Shah has put us on backfoot, says Salman Butt 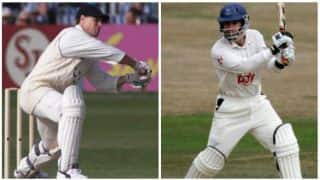