The first session belonged to India but after that it has been West Indies who came back into the match.

Day Two of the third Test between India and West Indies ended with hosts at 107 for 1 at stumps. The home team had a much better day as they had their noses ahead of the visitors for most part. India started the day on a positive note with both their overnight batsmen, Ravichandran Ashwin and Wriddhiman Saha, getting to their hundreds but after that there was not much to cheer about from their perspective. Aditya Sahay compiles the best moments from Day Two of the third Test from Darren Sammy National Cricket Stadium. Full Cricket Scorecard: India vs West Indies, 3rd Test match

Dominance of Ashwin-Saha in first session: India started the day at 234 for 5 as the pair of Ashwin and Saha had toiled hard for their runs in the final session of Day One. They continued from where they had left off as both were in complete control of the proceedings in the morning session. 82 runs were added in the first session without losing any wicket. They scored at a brisk rate with Saha dealing in boundaries whereas Ashwin helped himself to 99 not out at the stroke of lunch. They had, by then, taken India to a score they were far from reaching as half the side was out with only 126 runs on board. Both the players were given a standing ovation as they changed the crux of the match with a hard-fought partnership.

Records tumbled as Ashwin-Saha score hundreds: Both the right-handers looked at ease and showed no signs of nervousness in their 90s as Ashwin was the first to reach hundred, also his second of the series, with a six off Roston Chase. Saha also brought up his valiant century and waved to the dressing room in relief. This was the wicketkeeper-batsman s first Test hundred. Ashwin also became the first Indian to score twin centuries and take two five-fors in the same series. Saha and Ashwin also recorded the second highest partnership for sixth wicket overseas. Ashwin scored a magnificent hundred in the series opener while he has also completely bamboozled the hosts batting line-up on two occasions with the red cherry.

Mini collapse deprived India of reaching 400: Saha and Ashwin s fight at the crease ended when the former got out with the score at 339. The pair had more than done the job for the team and now it was up to the tail to compliment them and at least take the team past 400. The 213-run stand between Saha and Ashwin was ended by Miguel Cummins and from thereon began the slide for the visitors. Ashwin lost Ravindra Jadeja and Bhuvneshwar Kumar in quick successions and later departed for 118. The tail was exposed too early and with a fine display of bowling by Cummins and contributions from Alzarri Joseph and Shannon Gabriel, India lost the last five wickets for only 14 runs. This definitely showed how much the West Indians were frustrated by their effort after having the opponents by the hook for most part of Day One. ALSO READ: Day 2 Report: Kraigg Brathwaite’s calm fifty guides West Indies to 107-1 at stumps vs India

West Indies top-order sees through the day without much damage: West Indies have certainly improved in their performance as they did not let India get a mammoth total and knowing this, they worked well for their runs. At stumps, West Indies had lost only one wicket in the form of Leon Johnson, who was run out by a direct hit from KL Rahul. Kraigg Brathwaite remained unbeaten on a calm fifty whereas out-of-form, Darren Bravo, kept his cool to see the day through for his side. The Indian bowlers did not look like taking wickets, though they tried their luck with short pitched deliveries but remained luckless, as West Indies top-order played them carefully and with ease. The pitch has also eased out for batting.

The first session belonged to India but after that it has been West Indies who came back into the match. A very crucial day lies ahead in this Test match as for the first time in the series, West Indies are making things difficult for the visitors. They still trail India by 246 runs and it all depends on how long can they maintain the momentum and not throw it away like they did on Day One. 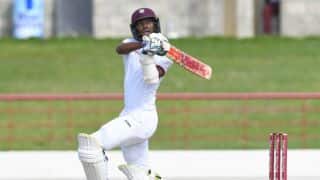 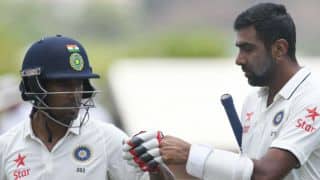