Cheteshwar Pujara needs tremendous amount of luck or else his fans may hardly see him as a regular in whites.

“We understood that a player like Rohit Sharma needs to be backed, and that meant that I had to go to No. 3. I would like to bat at No. 3. Ajinkya Rahane is solid for us at No. 4 and Rohit is dangerous at No. 5. I don’t mind taking responsibility and batting ahead,” said a jubilant Virat Kohli after his team won the third Test against West Indies to seal the four-Test series 2-0 with one game to go. It seems Kohli has his own strategies for his new-look Test side and is adamant to continue on the changes he made in the third Test, despite receiving a lukewarm response from many quarters. It is a gain for Rohit, but what about Cheteshwar Pujara? Full Cricket Scorecard: India vs West Indies, 3rd Test match

India played Pujara in the first two matches of the series against West Indies. He had only two chances as India batted once in both the games. Pujara made 16 in Antigua while contributed with a patient 46 in Jamaica. He got starts in both the innings but could not make it count. Pujara’s failure has caught hold of everyone’s attention as he had a rollicking start to his Test career with scores of hundreds. Big hundreds. He made 204 against Australia, 206 not out versus England, 159 versus New Zealand and 113 against West Indies.

All these centuries and double-centuries did come in home conditions but, were instrumental in leading India to wins. He showed exuberance and resilience to stitch a patient and typical ‘Test innings’ at a crucial No. 3 position then. Comparisons as India’s next ‘wall’, Rahul Dravid, soon followed. His habit of not playing any rash shots, valuing his wicket and applying himself for long showed he had a knack of playing Tests.

India traveled to South Africa in end-2013. Pujara’s best innings came in the first Test at Johannesburg when he struck 153 against a bowling attack comprising of Dale Steyn, Vernon Philander and Morne Morkel. He was comfortable with the bounce, pace and movement in the pitch. He had almost made the No. 3 position his own. India vs West Indies 3rd Test, Day 5 Full Updates

India next toured New Zealand and he fared terribly with only 60 runs in 4 innings. That may have been an off tour for him, but he was expected to make it up for that in England. But the tour of England, exposed his weakness. He struggled against swinging deliveries. An average of 22.20 didn’t help either. Then another flaw in his batting became evident. His grip weakened and perhaps due to a jolt in confidence, he started playing the ball with an evident gap between bat and pad. He did score a few fifties but that did not help his cause, as the Pujara who used to convert fifties into hundreds, was lost somewhere. He could not replicate performances that he had delivered at home.

Soon India were off to play Sri Lanka. He came back with a brilliant, typical Pujara innings of 145 against the hosts and helped India win the series there after two decades in the sub-continent. After all this, he has still been inconsistent or has not capitalised on starts. ALSO READ: Kohli to persist with Rohit ahead of Pujara?

Is Kohli done with Pujara? Is Rohit his ideal replacement?

Since Kohli has taken over from MS Dhoni in Tests, Pujara has more or less failed to live upto the expectations he set on everyone’s mind on his arrival. He has always taken enough time at the crease to get going and with his current form, his innings has become even slower. Kohli likes the game going forward and not let the opponents feel at ease. He likes his batsmen to take time but not get overcautious. Is Pujara overcautious, according to Kohli? He gave Rohit a chance ahead of Pujara in the third Test but made him bat at No. 5, instead of the latter’s usual No. 3 position. Does he know Rohit’s issue with the moving ball is much bigger than that of Pujara?

Kohli also had a torrid time in England, facing the new ball, but has never been short of confidence and since he likes leading from the front, he promoted himself up the order. Neither Kohli nor Rohit did anything extra ordinary. Rohit did score a vital 41-run knock in the second innings, including three maximums and somehow managed to justify Kohli’s stance on him that he is dangerous and can change the game in one session. Rohit has this image as he has scored big in coloured clothing’s and never let the momentum down. Kohli has always been a fan of Rohit’s elegance and clean hitting. By giving Rohit a place, Kohli clearly wants to come up and face the bouncers, pace and swinging ball himself at No.3, as he is comparatively better than Pujara and Rohit, on this account. The Indian captain is ready to take that ‘extra responsibility’, as he said. ALSO READ: IND vs WI: Kohli not ‘uncomfortable’ at No. 3 position

How good is Rohit in Tests?

Many would give the answer to the above question at one go. But let us go through his records. He has forgettable averages in Australia (28.83), England (17), South Africa (11.25) a somewhat decent one (33.25) in Sri Lanka and his best in New Zealand (40.66). It goes without saying that, in Tests, such averages are not akin to a proper batsman. He has also been given chances, especially since Kohli took helm of things. He has thrown his wicket outrageously, for instance, in Delhi, against South Africa in 2015. He can take the attack to the opposition in One-Day Internationals (ODIs) but falls flat in whites.

Rohit has plenty of problems to solve before he gets better in Test cricket. He gets beaten easily playing balls outside off stump. His main issue is just not as patient as he should be. He carries the ODI mindset to be calculative and hit one out of the park in between. Often, he has to walk back to the pavilion for doing this. A surprise bouncer, at times, tricks him into playing it in the air. Honestly, he is not an apt replacement for Pujara. Pujara is going through a tough time too but is more suited to the grilling of Tests, just like Rohit is for shorter formats. The thing working well for Rohit is that his captain wants him to play naturally. He wants Rohit to not allow the bowlers to settle down instead of just sticking around and holding one end firmly, something what Pujara is more capable of. Match report: IND beat WI by 237 runs in 3rd Test; clinch series

Pujara has let down many in recent times since he has such a good start to his Test career. Is there an end to this Rohit-Pujara debate? Or is this the signal of the start of Pujara’s end? Looks like he (Pujara) has already lost the battle. He needs tremendous amount of luck or else his fans may hardly see him as a regular in whites. 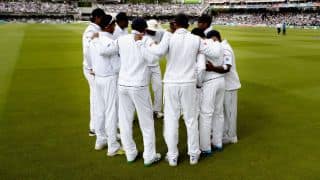