India vs West Indies: KL Rahul or Evin Lewis – who was the better centurion?

India vs West Indies: KL Rahul or Evin Lewis – who was the better centurion?

KL Rahul and Evin Lewis starred for their respective teams in the first T20I.

One thing similar between Evin Lewis and KL Rahul is the fact that both of them are new to T20 International (T20I) cricket. But looking at the way they batted on Saturday, it seemed like they have been playing in this format all their lives. While Lewis, during the course of his innings went on the attack – perhaps trying to match his opening partner Johnson Charles shot for shot – Rahul had a more calculated approach.  Lewis had a forgettable debut, which came against Afghanistan in the T20 World Cup 2016. He was dismissed for a seven-ball duck, but came roaring back in his second game against India in Florida, where he scored a 48-ball ton. Full Cricket Scorecard: India vs West Indies, 2nd T20I at Lauderhill

Lewis opened the batting for West Indies and was not really under any sort of pressure. He had Charles going ballistic at one end and Lewis too could afford to throw his bat around a bit, considering the depth in the West Indies batting line-up. Lewis went hard at most of the deliveries, and also failed to time a few. But a few of his un-timed shots too went to or over the fence. Lewis used his power to good effect and launched the ball over the ropes on nine occasions with minimum of fuss. Five of those hits came off consecutive deliveries of an over from Stuart Binny. It is not easy to fill in for Chris Gayle in any format, let alone T20s, but Lewis did perfectly well and his innings has surely given the skipper a headache ahead of the second game. Lewis cannot be dropped after this stupendous innings. India vs West Indies, 2nd T20I: Preview

When Rahul came into bat, India were already two down with their best batsman Virat Kohli back in the hut as well. India needed 198 more to get from just 92 deliveries. It was an uphill task, but one that could be achieved, if India played to their strengths. Rahul made his T20I debut against Zimbabwe and just like Lewis, he was out for a duck. But he bounced back with scores of 47 not out and 22 in the remaining games, helping India win the series. Rahul is no stranger to bouncing back after poor scores. He did so even in the Test arena, when he was dismissed for 3 and 1 in his debut against Australia and scored a match-saving 110 in the next match at Sydney.

The good thing about Rahul is that once he gets in, he goes on to make a big score – be it any format. His transformation into a limited-overs player and his growth in the last year or so has been phenomenal. A year ago, he was nowhere in contention to play in the limited-overs side and now he suddenly looks like he has belonged here his entire career.

But it was Rahul, who always stayed one step ahead of Lewis. Lewis brought up his fifty of 26 deliveries, Rahul achieved that in 25. Again, it took Lewis 47 balls to score his maiden century, Rahul did that one ball better. But as mentioned above, Rahul doing so under pressure, made his innings all the more special. READ: IND vs WI 1st T20I 2016: Dhoni breaks Ponting’s record

Rahul’s innings was also pleasing to the eye. He played those cover drives and those shots inside out to perfection. He was clearly the one, who was more in control than Lewis. Yes, Rahul was dropped when he was only on 38. Had he been dismissed at that time, the scenario of the match could have been a lot different. But despite West Indies being sloppy in the field – ground fielding and catching – they ended up winning, only just. They might not be second time lucky and will have to shape up to win the second match.

Lewis’ most effective shot was the pull. He used it to good effect, scoring a huge chunk  of his runs in through mid-wicket and square on the onside. A few top-edges luckily went over the ropes as well, but nothing can be taken away from his innings. He made merry on a batsman’s paradise and if given a chance, he will do it again.

For the ones following, the Bangladesh Premier League (BPL) and the Caribbean Premier League (CPL) Lewis needs no introduction. He scored the only century in the 2015 season of the BPL for Barisal Bulls. Rahul had a slow start to his T20 career as a whole. He did not have a good outing with the Sunrisers Hyderabad (SRH) , but in the 2016 season of the Indian Premier League (IPL), he turned out for Royal Challengers Bangalore (RCB) and the world got to see a different side of him. Rahul scored close to 400 runs in 14 matches at an average of over 44 and a strike rate of 146.49. READ: India vs West Indies in USA: Cricket returns to Uncle Sam’s territory

West Indies under their new leader Carlos Brathwaite have certainly gotten off to a good start. When it comes to T20Is, there is no other dangerous team than the West Indies – a contrast to their Test side. The limelight may have been taken away by the two centurions, but with just eight needed off the final over in the first match, India will consider themselves unlucky to not have crossed the line. Dwayne Bravo showed his class and despite taking a pounding in the initial stages of the game, came back strongly. What would have been more sweeter than the fact that he dismissed his former IPL skipper to win his side the game.

West Indies have a 4-2 advantage over India in T20Is. Will India cut the deficit or will West Indies extend their lead? Will Rahul and Lewis star for their respective sides again in the second match or will a new star emerge? Let’s wait and watch. 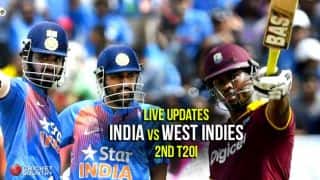