Virat Kohli s India are second with 122 ratings points, while Jason Holder s tourists are down at ninth behind Bangladesh and Sri Lanka.

From October 21, India and West Indies will engage in five ODIs before they finish the series with T20Is. These five ODIs offer both teams a big opportunity to fine-tune their plans for the 2019 ICC Cricket World Cup, especially Virat Kohli‘s India who have batting issues to resolve and who do not play ODIs until mid-January.

With player rotation imminent, the BCCI last week named the squad for the first two ODIs versus West Indies and chances are that the last three games will see more reshuffling. West Indies have named a depleted squad without Chris Gayle and Andre Russell, and with Evin Lewis pulling out of the series on Wednesday the make-up of the visiting side has been further depleted.

Kohli s India are second with 122 ratings points, while Jason Holder s tourists are down at ninth behind Bangladesh and Sri Lanka and two points ahead of Afghanistan.

India, led by Rohit Sharma, recently won the Asia Cup title in the UAE with an unbeaten record. India beat Hong Kong, Pakistan (twice) and Bangladesh (twice) including in the final by three wickets off the last ball of a thrilling encounter. Overall in 2018, their ODI form has seen them win a landmark ODI series in South Africa 5-1, lose to England 1-2 in England then lift the Asia Cup.

West Indies man ODI contest this year was in the 2019 ICC Cricket World Cup Qualifiers in Zimbabwe where they beat UAE, PNG, Ireland, Zimbabwe and Scotland while losing to Afghanistan twice, the second time in the final by seven wickets. Most recently, they lost 1-2 to Bangladesh at home in July after winning the first ODI.

The last time India met West Indies in ODIs was in June-July of last year, when after the ICC Champions Trophy they flew to the Caribbean for a limited-overs series. Kohli s team won 3-1 with Ajinkya Rahane named Man of the Series for scoring 336 runs in five games at an average of 67.20.

Overall in ODIs, India have won 56 of 121 ODIs versus West Indies, losing 61 with one tie and three no-results. The last time West Indies won an ODI series against India was 2006.

Eye on the World Cup:

With the clock ticking on their plans for the World Cup in England, the upcoming ODIs versus West Indies are India s last chance before mid-January to address some focal points in the format. India have not locked on a middle order and also need to identify the third opener after Rohit and Shikhar Dhawan. Mohammed Shami and Umesh Yadav are the seniors in the absence of Bhuvneshwar Kumar and Jasprit Bumrah, and the third option is the rookie from Rajasthan, Khaleel Ahmed. Seeing what Shami and Umesh have to offer in ODIs will be critical for India as they build towards the World Cup.

After they leave India, West Indies head to Bangladesh for a full tour, which includes three ODIs. They then host England in January-February, their last shot at locking in their World Cup squad. Chris Gayle has stated his availably for the ODIs at home versus England as he bids for one final World Cup, but with Lewis now out of the India tour against the backdrop of him declining a central contract, the nature of West Indies top order is uncertain. 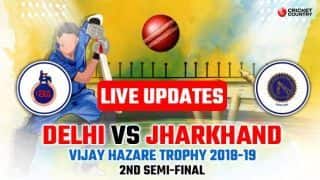