We look back at the five most enthralling individual batting performances in India vs West Indies games.

India and West Indies will face each other in a five-match series starting October 21, which will mark the eighth series between the two sides in India. But before we get there, CricketCountry looks back at the five most enthralling individual batting performances of these two teams against one another in India.

It was because his innings against India that Chris Gayle announced himself to the world. Three of his first five ODI centuries came against them all all three during the tour of 2002. India and West Indies played seven ODIs, and with the levelled at 2-2 after the first four games, Gayle powered his team to a five-wicket win at Baroda. India s top three Sourav Ganguly, Virender Sehwag and VVS Laxman had fired them to 212 for two, but a middle order collapse resulted in India ending up on 290 for 8. In reply, Gayle, struck his third century of the series, giving a stick to the experienced Javagal Srinath and debutant L Balaji who conceded 44 off four overs. The Jamaican reached his century with a six off Harbhajan Singh but perished the next ball, but by then had brought West Indies within striking distance of victory. Ricardo Powell and captain Carl Hooper saw the team through with seven balls to spare. Gayle finished the series with 455 runs.

In the previous game too, Gayle had continued his annihilation of India with a second century of the series, but the fourth ODI at Ahmedabad got to be known for one of Rahul Dravid‘s finest knock across all formats. Back in the day, chasing a 300-plus target successfully was rare, and approximately four months after doing it during the Natwest Trophy final, India did it again; only this time, it was Dravid taking the honours with a magnificent unbeaten 109 that sealed a sensational win. Gayle’s hundred, aided by an unbeaten 99 from Ramnaresh Sarwan had fired the West Indies to 324, and once India were reduced to 231 for five, chances looked slim. But from there, with 94 needed off 75, Dravid fashioned a tremendous turnaround with Sanjay Bangar, who smashed his way to 57 off 41 with five fours and two sixes. Dravid, who had added 103 with Laxman (66) fought tiredness and cramps and put on an unbeaten 94 with Bangar to get India home with 14 balls to spare to level the series.

2006 was a rough year for batting legend Sachin Tendulkar. Having recovered from a career-threatening tennis elbow and returning with a blistering 141 against the West Indies in Kuala Lumpur, Tendulkar struggled for the remainder of the year. Runs had dried up and his form was a concern with the World Cup scheduled the year after. India faced West Indies in a four-match ODI series to warm up for cricket’s extravaganza and with matters tied at 2-2, Tendulkar fired India to a series win with a 76-ball century.

Tendulkar took India to 341, along with half-centuries from Ganguly and Dravid. Coming at the fall of Ganguly’s wicket, Tendulkar reached three figures off the last ball of the innings, and during the final passage of play, he along with MS Dhoni (40* off 20) tonked 75 from 39 balls. He was dropped twice, on 85 and 91 but it was the slice of luck Tendulkar needed to regain form. A slog sweep for six off Marlon Samuels that went sailing over the stadium was the highlight of the innings. West Indies were bowled out for 181 with only Samuels (55) and Denesh Ramdin (40) putting up valuable contributions.

Samuels broke million Indian hearts in the final game of the series. In the deciding game, Samuels scored a brutal 108 off 75 balls to win the match for West Indies as India collapsed to a 135-run loss. On a flat surface in Vijaywada, in the absence of Ganguly, Dravid put West Indies into bat, and despite getting the danger man Gayle out, India were at the receiving end of Samuels’ bullish innings. He was supported by Wavell Hinds (58) and Sarwan (83) as West Indies piled up 315 for 6. The Indian bowlers who had begun well, their figures were spoilt by Samuels, who scored 11 boundaries and five hits over the ropes. In reply, there would be no repeat of the fourth ODI this time around. Dravid, Laxman, Sehwag and Dinesh Mongia all fell to leave India at 67 for 4, and despite a fighting 68 from Yuvraj Singh, the last six batsmen could only muster 40 runs.

Less than two years after Tendulkar had struck ODI cricket’s maiden double-century, Sehwag became the second cricketer to get there as India completed a 3-0 sweep of West Indies in 2011 with a 153-run win in Indore. Unlike Tendulkar, Sehwag reached the landmark in the 44th over, which meant that he had six overs to add as many as he could. Unfortunately, just 19 runs later, Sehwag perished but his innings brought India their highest ODI total of 418 for 5. Sehwag’s 149-ball knock contained 25 boundaries and seven sixes.

It was also Sehwag’s first century as India’s captain. He and Gautam Gambhir added 176 for the opening wicket. He brought up his century but ran Gambhir out the next ball. Visibly upset, Sehwag went on to punish the West Indies. Kemar Roach conceded 88 from his 10 overs, Andre Russell 63 off seven. In reply, Ramdin showed fight with a run-a-ball 96 but West Indies struggled against Ravindra Jadeja and the part-time spin of the Rohit Sharma, who picked up 3 for 43. 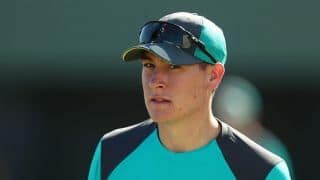 Matt Renshaw, Brendan Doggett and Micheal Neser to fly back to Australia