Zimbabwe have won the first match of the Twenty20 International (T20I) series against India. Visitors, who made lots of changes in their squad giving chance to five players to make their T20I debut, could not restrict Zimbabwe to a score below 150, which could have been achievable. Zimbabwe, on the contrary posted 170 with the help of Elton Chigumbura’s assault in the final overs of their innings. India started poorly losing key wickets early on. Most of the Indian batters got starts but they could not convert them into big scores. At the end, India fell just two runs short of equalising the opposition’s score of 170. Live Cricket Scorecard: Zimbabwe vs India, 1st T20I, at Harare

Decent start for Zimbabwe: The hosts reached 72 for 2 in the first 10 overs of their innings losing the wickets of Hamilton Masakadza and Chamu Chibhabha. It was a pretty good start considering their performance in the recently concluded One-Day International series. The middle and lower-order batsmen took full advantage of this start and helped Zimbabwe post a huge score of 170. Live Updates: India vs Zimbabwe 2016, Live Cricket Score, 1st T20I at Harare

Zimbabwe scalp early wickets: Donald Tiripano cleaned up KL Rahul off the very first ball of India innings. Mandeep Singh and Ambati Rayudu tried to stabilise the innings. They made a 43-run second-wicket stand. Mandeep was the second Indian batsman to be dismissed. He scored 31 in 27 balls. He fell just one ball short before the completion of the powerplay. Ambati Rayudu followed suit. Both the second and third wickets were picked up by Chibhabha.

Manish Pandey’s prudent knock: Pandey, who scored 48 off 35 balls, played according to the situation. He continued to alter the pace of his innings as per the match situation. When he was batting on 39, he had faced only 28 balls having hit three sixes with no four. He started to hit some big shots later on in his innings but off lose deliveries. At this moment, match got quite interesting as it was difficult to predict who could win this clash. Pandey attempted a slog over off but mistimed the ball. He was caught in the deep just two short of his fifty.

Akshar Patel brings India close to victory: Akshar scored a brisk 9-ball 18 but could not take India to victory. In the final over, India needed only eight runs but they could only score five. MS Dhoni did not get much of the strike. Zimbabwe took a two-run victory. 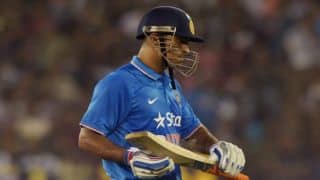