It will be unfair to not give Bangladesh any credit for the victory, but India were largely responsible for their own peril.

India were beaten comprehensively by Bangladesh in the first One-Day International (ODI) at Dhaka. Rishad D’Souza feels India looked rusty in the encounter and did not take Bangladesh seriously, enough despite the team’s meteoric rise in recent times.

Bangladesh have made giant strides in the right direction in the ODI format in recent times. Not only did they perform well in the ICC Cricket World Cup 2015 to enter the quarter-final stages, but have transformed into an unstoppable; almost invincible team at home. Their report card includes whitewashing New Zealand and Pakistan in home ODIs. READ: Virat Kohli’s recent ODI form is a worrying aspect for India

India ought to have taken such a resurgent Bangladesh side seriously, especially when playing in their own den. They certainly made the right move by sending a full-strength side on the tour, but the first match indicated that they did not quite get themselves into the required frame of mind to take on such a side. READ: India showed arrogance and complacency against Bangladesh in 1st ODI

It will be unfair to not give Bangladesh any credit for the victory, but India were largely responsible for their own peril. As a matter of fact, India looked rusty and underperformed in every department. Possibly, there was even a sense of dangerous complacency crept in that led to India’s downfall. READ: Overconfident India succumb to humiliating defeat against Bangladesh in 1st ODI

In the bowling department, put plainly Mohit Sharma was just pathetic. Ravindra Jadeja looked far from his threatening best and UmeshYadav dealt in his usual mix of good and bad bowling. Even MS Dhoni’s captaincy in the field was quite questionable. For instance, Bhuvneshwar Kumar was given just seven overs even though he looked to be at his best. Certainly Dhoni could have avoided experimenting with Virat Kohli for two overs when he had a quality bowler in hand.

The batting line up did not fair much better. The openers may have got decent scores but in all they offered at least four chances, which the Bangladeshis messed. With that many chances you’d expect at least one batsman to go on to make a ton. Oncethey were out, the Indians lost wickets in clusters.

Debutant Mustafizur Rahman was spectacular but it can’t be debated that some of his wickets were pure gifts from the batsmen. The likes of Dhoni, Kohli and Ajinkya Rahane were all scratchy and were not applying themselves. If it continues in this fashion, we may witness another Banglawash! READ: Mustafizur Rahman takes five wickets on ODI debut, becomes 10th man to do so

(RishadD’Souza, a reporter with CricketCountry, gave up hopes of playing Test cricket after a poor gully-cricket career. He now reports on the sport. You can follow @RDcric on Twitter) 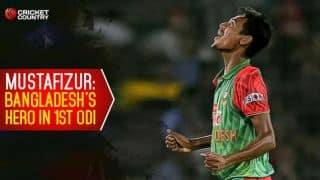