With India’s regular opening batsman Murali Vijay being ruled out of the first Test against Sri Lanka at Galle, KL Rahul will be an ideal replacement. Rahul has scored heavily in over the last couple of seasons, in which his domestic side Karnataka won the Ranji Trophy 2014-15. Rahul showed positive signs in the first opportunity that he got in Australia, and has emerged as a strong contender for the opening slot, making lives tough for both Vijay and Shikhar Dhawan.   Pramod Ananth reckons Vijay will not be missed as Rahul, waiting in the wings, looks set to grab the opportunity with both the hands.

Rahul scored a magnificent century in his second Test at Sydney, after surviving a splendid spell of fast bowling by left-arm Mitchell Starc, who peppered him with short bowling, especially on the body. Rahul had got the opportunity to open the innings alongside Vijay, after Dhawan was dropped following string of poor performances. Rahul had a horrendous debut at Melbourne, where he played a terrible shot to get out in the first innings, but redeemed himself in his second Test, scoring at vital 110 that surely would have served as a massive morale booster going ahead. In his first outing Rahul looked a bundle of nerves, but that horror start would have made him concentrate harder and he responded with his maiden century at the Sydney Cricket Ground. READ: KL Rahul: One for the future

He was set to play the one-off Test against Bangladesh in June 2015 but an injury forced him out of the tour and Dhawan made full use of the opportunity, cracking 173. That innings put Dhawan in the forefront to be India’s first choice opener along with Vijay. But now, with Vijay out of the first Test in Sri Lanka, Rahul gets another crack to make the competition between the three even more interesting. A good performance will probably see him having a longer run in the team, perhaps in the lower order.

Both Rahul and Vijay too have had productive recent past few years. But going by the numbers, Rahul seems to be having an edge over Vijay. If Rahul had been a part of the Indian batting line-up that made merry in Bangladesh, he might have been able to extend the lead over Vijay. But as luck would have it, Dhawan got the chance to do exactly that. READ: KL Rahul: First triple centurion for Karnataka in Ranji Trophy

Talking about form, Vijay was magnificent in Australia. He would often be the one holding fort at the top of the innings and would play a long innings. It’s not a place where many players score big hundreds, but Vijay proved with the right technique and temperament, he can do wonders in that part of the world.

No doubt, the above figures are extremely impressive, but Rahul, who was Vijay’s opponent in the Ranji Trophy 2014-15 final, has an excellent record as well. Here are Rahul’s figures for 2014-15:

Rahul has a far superior average and recently became the first batsman from Karnataka to score a triple century, when he made 337 against Uttar Pradesh in January 2015. Rahul opens the innings for Karnataka, but with Vijay and Dhawan in prime form, he will have to settle for a place somewhere in the middle-order, if required. READ: India in Test cricket: Opening pairs born in the same state

It is good to see a healthy competition in the Indian side. With the selectors having numerous good options, it will surely make his decision a tad difficult. This is something no selector in the world will mind.

If Vijay is fit for the second Test, he will surely return to the playing XI, but Rahul can certainly make sure that he is not dropped because of a poor performance. 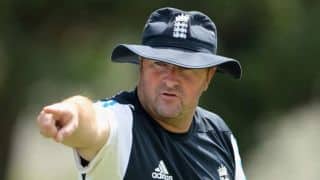