Hindus have produced most cricketers for the Indian cricket team. In fact, there have been several all-Hindu sides in India, the first being at Edgbaston, 1979.

India, as history and civic books will tell you, is a land of unity in diversity. Of the many countries that play cricket seriously, India has the most teams in their premier domestic cricket championship in fact, more than what Australia, New Zealand, South Africa, West Indies, and Zimbabwe have put together. Before the Ranji Trophy, however, India had a contest called the Bombay Presidency, contested annually between the Parsees (the first Indian to take to cricket) and Europeans (mostly the British, but others as well). The tournament started in 1892-93. The Hindus came to the fray in 1907-08, and the name of the tournament was changed to Bombay Triangular, which was updated to Quadrangular in 1912-13 when the Muslims joined.

The matches were prestigious, keenly contested, and despite the intensity and chances of communal riots, nothing of that sort took place. The Quadrangular was not contested in the early 1930s. It resumed in 1934-35; three seasons later a fifth team The Rest, consisting mostly of Indians of other religions and a few Sri Lankans made the contest Pentangular.

The tournament was not contested after 1945-46, for some, including Mahatma Gandhi, were under the impression that it would lead to communal unrest. The Ranji Trophy became India s premier domestic competition as a result.

Given the way cricketers of various religions have played for the Indian Test team together, it seems pertinent to create all-time XIs based on them.

It is not the purpose of this article to hurt religious sentiments.

But then, Hindus have produced most cricketers for the Indian cricket team. In fact, there have been several all-Hindu sides in India, the first being at Edgbaston, 1979. That makes it difficult to choose one team: let us settle for two. 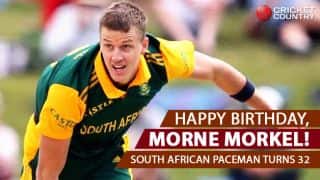