Indian cricketer arrested for rape in Zimbabwe: Another instance of blunder by media

Indian cricketer arrested for rape in Zimbabwe: Another instance of blunder by media

Just after India's loss in the first T20I against the hosts, a false report of an Indian cricketer being arrested for rape in Zimbabwe emerged out of nowhere.

We, in the journalism industry often face stiff competition from within. The race to reach out to the audience first is a never ending process for us here. What is sellable, sells. What is worth grabbing eyeballs, grabs. The fact that we compromise on quality in the race to be the first is a fact in itself. The fact that we compromise on responsibility in the race to be the first, is also a known fact. We did that, when we reported of Shahid Afridi’s daughter being no more, we did that when reports of Hashim Amla not giving an interview to an inappropriately dressed female reporter went viral. And most recently we did that today, when reports of an Indian cricketer being arrested for rape in Zimbabwe started surfacing all over the internet and the social media. READ:No Indian cricketer arrested for rape in Zimbabwe: Source

‘Indian Cricketer arrested for rape in Zimababwe’, was a phrase that spread like fire this morning. Although, the truth was not what those words pointed out to be. An official associated with one of the sponsors of the series was arrested for alleged rape, even though he pleaded innocence to the charge. But before that was found out, the Indian media had taken up the issue, packaged it and within seconds made a story out of it. Thankfully, the news was false, and then the ‘apology for conveying unverified reports’ thought came to our minds. We did breathe a sigh of relief then. Didn’t we?

Media is a business. How many times have we heard it? Plenty of times. It is in fact business. But what we fail to understand time and again is that there is, apart from the business point of view, a responsibility on our shoulders. A big one. We would not have been making news, if people were not reading it. They are reading it. And so, the least we can do is make them read what the news really is. The correct news. The truth.

Understand, that media as a business can succeed by being creative as well. We do not need to spread rumors and eventually say sorry to the reader. It might sound silly, but it is exactly what we are doing. Period.

Sometimes I feel it is like a completely different mode that we turn on when a breaking news comes in. We talk about accuracy and fairness. We speak about ethics. We know about the ‘Norms of Journalistic Conduct’ and we obviously understand how important is verifying of facts before publishing a story. Yes. This is us before a breaking news comes in. But just as soon as it comes, we turn into greedy traffic-hungry sharks. It is puzzling.

And while, the ‘Indian cricketer arrested for Rape’ story dwindles gradually, we need to think again. But not just think. (We have done that a lot in the past to no avail.) We simply need to understand that we as a media, exist for a reason. That reason is not to publish unverified facts. Anyone can do that. 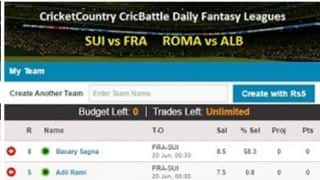