There cannot be much debate about the fact that the Indian Premier League (IPL) attracts the finest cricketing talent in the world. Each and every team in the world premier T20 league has men who can dramatically alter the course of a game in a matter of few balls that creates spectacular finishes.H Natarajan picks a Dream XI from an outrageous talent pool in the fifth edition. There cannot be much debate about the fact that the Indian Premier League (IPL) attracts the finest cricketing talent in the world. Each and every team in the world’s premier T20 league has men who can dramatically alter the course of a game in a matter of few balls that creates spectacular finishes.

To select a Dream XI from such outrageous talent pool is like stepping into shark-infested waters!

The vast majority of the eleven that I picked comprises players turned out to be players of proven quality in Test cricket. It just goes to show that a good Test player can be good in the shorter versions of the game; the opposite may not necessarily be true as some of the champions in the abridged version have been totally lost in Test cricket.

The dangerous David Warner could have been among the top run-getters, but he was available only for the last six games in which he scored 246 runs @ 49.20.

Selecting two from such dexterous destroyers was an onerous task. Gayle walks into the eleven as my first choice opener. There is no batsman in T20 cricket who is feared as much as the Jamaican who can turn around games in a matter of few overs with his inimitable hitting. His tally of 59 sixes in IPL 2012 is 30 more than the men sharing the No 2 spot – Kevin Pietersen and Craig White with 20 each! The fact that Gayle is a handy bowler and a brilliant fielder further supports his case.

I toyed with the idea of having someone who can also play the waiting game for a team fully of stroke-makers. I pondered over Gambhir and Rahane – for long the Orange Cap holder – for this role. But in the end, it was a difficult choice to opt between Warner and Sehwag. Clearly the two men closest – if one can dare to use that word – to Gayle’s furious intent with the bat. Sehwag was in awesome form in the league phase, slamming five half-centuries in a row – a T20 record. But Warner was also in imperious form, with his 54-ball unbeaten 109 (10 fours, 7 sixes, SR 201.85) against Deccan Chargers being the pick. His strike rate was 172.02 in the six matches he has played thus far this season. He hit 13 sixes in these six games is much higher than Sehwag’s 19 sixes from 13 games.

My choice of the two openers is thus Chris Gayle and David Warner.

Yet again one had pick from a large field. It’s not easy to leave out men like Steve Smith, Rohit Sharma, JP Duminy, Owais Shah, Ambati Rayudu and Craig White, to name a few. But my choices for Numbers Three to Number Six were: Shane Watson, Kevin Pietersen, AB de Villiers and David Hussey.

Like Warner, Watson was available only after Australia’s tour of the West Indies. But like Warner, Watson was an instant hit. He averaged 42.50 from his seven games and had a fabulous strike-rate 151.78. He also gives the side the option of an additional all-rounder and back-up opener. But in this eleven he takes the pivotal No 3 slot.

At No 5 would be AB de Villiers. If there is one player who has left a huge impression in this edition for turning the complexion of matches quite dramatically with innovative hitting, then it has to be de Villiers. His 17-ball unbeaten 47 against Deccan Chargers and his sensational assault against the world’s most feared fast bowler, Dale Steyn, will be part of IPL folklore. AB de Villiers scored 319 at the average of almost 40 and a strike rate of 161-plus. His presence also eliminates the need of a specialist keeper.

At No 6 would be Kieron Pollard, who scored over Azhar Mahmood, Dwayne Bravo, Kevon Cooper and Jacques Kallis as multi-utility players. Pollard would be the floater in the line-up. Like his fellow-West Indian Chris Gayle, Pollard has a reputation for tearing any attack. His 200-plus runs came at 145-plus. He was Mumbai Indians’s second highest wicket-taker (15) and enhanced his worth with his electric fielding. But it was a close call between him and Dwayne Bravo and Azhar.

At No 7 would be David Hussey – a quiet, unsung hero. Hussey has a reputation of being one of the finest T20 players in the world, but in this edition of the IPL he also showed why he should be rated among the best captains as well, by filling in brilliantly for the injured Adam Gilchrist while leading Kings XI Punjab. Hussey was an oasis of calm and brilliant in his execution of plans to make Punjab a force to reckon with. Coming late in the order he played many cameos to finish with almost 400 runs at the strike rate of 129.83.

The pacemen take the next three slots in the eleven. Morne Morkel, Lasith Malinga, Dale Steyn, Munaf Patel, Vinay Kumar, Parwinder Awana, Umesh Yadav, Ashok Dinda and Zaheer Khan came in the reckoning. In the end, it was Morne Morkel who took the first slot by topping the wicket-takers’ list at the end of the league phase – 25 at an average of 16.64 and a strike-rate of 14.1

Malinga, without doubt the most difficult T20 bowler to face and especially at the death, took the second slot. His 22 wickets put him just behind Morne Morkel. He struck once every 14 balls.

But if there was one fast bowler who left the biggest impression in this IPL, it was Steyn, who finished with 18 wickets at 15.83 and an economy rate of 6.10. Clearly, there was too much on his plate playing for a weak side like Deccan Chargers.

The last slot will be for a spinner. In contention were Sunil Narine, Muttiah Muralitharan, Brad Hogg, Piyush Chawla, Amit Mishra and Shaikb al Hasan. Quite clearly, Sunil Narine towered over his rivals. He walks into the side. No batsman could claim to have read his mystery wares as he ended with 22 wickets – the second highest. His economy rate of 5.14 and strike rate of 13.9 speaks volumes for his prowess. Twice he took four wickets or more with a best of five for 19.

It’s only on finishing picking my eleven I realised that not a single Indian figures in the list. But that should not be a reflection of the Indian talent on display in the ongoing IPL as a number of players like Sehwag, Gambhir, Rohit, Dhawan, to name just a few, were strong contenders.

The above XI comprises three Australians, three South Africans, three West Indians, one Englishman and one Sri Lankan. The eleven comprises three from Delhi Daredevils, two from Royal Challengers Bangalore, two from Mumbai Indians, one each from Rajasthan Royals, Kings XI Punjab, Kolkata Knight Riders and Deccan Chargers. The only teams missing out are Chennai Super Kings and Pune Warriors, though Steve Smith lost very narrowly to Hussey, whose captaincy made the difference in the end.

The eleven I have picked gives tremendous options to the captain. There are three specialist fast bowlers – Steyn, Morkel and Malinga – and one spinner in Narine. There is quality support in the form of Pollard and Watson as the fifth and sixth bowlers. Besides, the likes of Pietersen, Gayle and Hussey are more than useful back-up bowlers.

This is the kind of team that could post a 250-plus total and restrict the opposition to a sub-100 total. And that’s why it’s called a Dream Team! 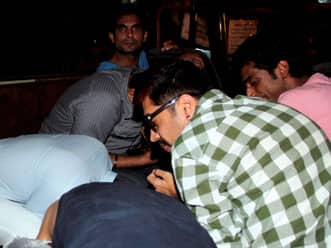