Here is the Flop XI of Indian Premier League 2015.

Mumbai Indians (MI) beat Chennai Super Kings (CSK) to win their second Indian Premier League (IPL) title in front of a packed house at Eden Gardens, Kolkata. The tournament had a lot of new players performing, but also saw many experienced cricketers failing to recreate past magic. Nikhil Popat picks out the flop eleven of the tournament.

Virender Sehwag, Kings XI Punjab: The former Indian opener showed glimpses of his prime at the start of the tournament, but as games went by his batting fell away and the soft dismissals hurt both him and Kings XI Punjab (KXIP) big time. He scored only 99 runs in eight games at an average of mere 12.37. To see a batsman of his caliber struggle was not a pleasing sight for any Indian cricket fan. READ: IPL 2015, The CricketCountry XI of the tournament

Mayank Agarwal, Delhi Daredevils: The Delhi Daredevils’ opener Mayank Agarwal has had some success before in the IPL, but he failed to impress in his stint for Delhi in IPL 2015. Shreyas Iyer was a revelation at the top for them. One wonders whether, if he got any substantial support from Mayank, Delhi could have posed more of a challenge. He scored 213 runs in ten games with just a couple of fifties averaging 23.66. READ: Consistent CSK fails to deliver finishing touch

Steven Smith, Rajasthan Royals (c): Coming on the back of a terrific summer, a lot was expected of Steven Smith, but he failed to live up the billing and it hurt Rajasthan Royals. He scored a couple of fifties en route to scoring 293 runs in 14 games at an average of 26.33. Though his captaincy was good, he could not get Rajasthan into the playoff after winning as many as five games on the trot at the start of the tournament. READ: Mumbai Indians in IPL 2015: All’s well that ends well

Glenn Maxwell, Kings XI Punjab: The ICC Cricket World Cup 2015-winning Australian Glenn Maxwell had an IPL season to forget. He scored only 145 runs in 11 games at a shockingly poor average of 13.18. His strike rate too was a mere 129.46. The major reason for him failing in this season of the IPL was the lack of patience to graft and not spending enough time in the middle. The fact that he faced just 112 balls in 11 games, which comes to roughly 10 balls per game, shows how tired he was mentally. His lack of runs hurt his team Kings XI Punjab the most as they finished last in the points table. READ: Inconsistent RCB pay price of being dependent on few players

Yuvraj Singh, Delhi Daredevils: Bought for a whopping amount of Rs 16 crore, Yuvraj Singh did not do any justice to his price. Despite a few good cameos, he had another poor season in the IPL making his case of an international recall even worse. His batting lacked the flair and despite the top order in Iyer and JP Duminy going great guns, Yuvraj could not capitalize on the platforms and make good scores. He scored 248 runs in 14 games at an average of just 19.07 with a couple of fifties. This was his worst season in the IPL and things are only getting tougher for him. READ: Misfiring Royals nowhere near their best

Dinesh Karthik, Royal Challengers Bangalore (wk): Dinesh Karthik has been around for a long time but has not fulfilled his potential. The ‘keeper-batsman often got to bat in the top order but failed miserably to force his team Royal Challengers Bangalore (RCB) to demote him down the order.  He had a horror season, averaging just 12.81 after 11 innings, scoring only 141 runs with a highest score of 28. He ended up being the most effective ‘keeper, though, and gets to don the gloves to try and make up for his batting failures. READ: Why the Knight Riders failed

James Faulkner, Rajasthan Royals: The Australian all-rounder was the Man of the Match in the ICC Cricket World Cup 2015 final between Australia and New Zealand, but he failed to emulate that high in IPL 2015. Touted as one of the best finishers in the game, he failed with both bat and ball. He scored 144 runs in 14 games at an average of just 18. His bowling did not come off at all, he averaged 53.25 with the ball, picking up just eight wickets in 13 games. He failed to win games from crunch situations for Rajasthan and it hurt their chances of going through to the playoffs. READ: Inconsistency hampers Delhi’s progress again

Mitchell Johnson, Kings XI Punjab: Mitchell Johnson was expected to lead Kings XI Punjab with the ball, but instead he led them out of the tournament very early with a poor display of bowling. He was hit around almost at will by many batsmen, something which looked impossible some time ago. He picked up nine wickets in as many games at an average of 37.33 and conceded runs easily, going at an economy rate of 9.37. He sure had a season to forget. READ: Kings XI Punjab in IPL 2015: Tale of riches to rags

Vinay Kumar, Mumbai Indians: Mumbai Indians won IPL 2015, but they had their weak links which did not cost them due to the excellence of others in the team. Vinay Kumar was one such thread for them which did not come off. Vinay picked up just seven wickets in 13 games averaging 52.57 with a poor economy rate of 8.45. READ: SRH rue over-reliance on top order, inconsistent selection

Pravin Tambe, Rajasthan Royals: Pravin Tambe was a success for Rajasthan Royals in the previous editions but he failed to live up to the expectations. He often bowled very flat and was not quite as effective as he used to be. In 10 games he picked up seven wickets only. He might not have conceded many runs but him not picking wickets did not help Rajasthan Royals one bit as the team lost steam towards the end.

Praveen Kumar, Sunrisers Hyderabad: The Indian pacer did not have a pleasant time in the IPL. Bowling along with probably the best bowlers of the tournament did not help him either. He was the weak link of Sunrisers Hyderabad bowling attack. He picked up just seven wickets in 10 games but leaked runs at an economy rate of 9.13. 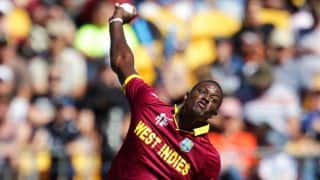