Looking at it in another way, how about this team playing the champions CSK? We wish...

Chennai Super Kings (CSK) returned to IPL with after a two-year ban. They had to relinquish their home venue, at Chepauk, Chennai. However, none of that could prevent them from clinching the title for the third time. Defying the age talks and critics perceptions, CSK showed why they are the most successful T20 franchise and that there exists a method in their madness. In MS Dhoni and Stephen Fleming they have two of the finest cricket brains.

Unlike other franchises, CSK did not bask on individual glories. It was a solid team effort where they found match-winners at different junctures. If Dwayne Bravo played a blinder in the tournament opener, Dhoni turned back the clock at Bengaluru and produced an unbelievable spectacle. And just when the talks centred around Ambati Rayudu or Faf du Plessis on who would be their main player in the summit clash, a vintage Shane Watson sealed the final.

CSK bagged neither the Orange Cap nor the Purple Cap but went on to clinch what mattered the most the IPL 2018 Trophy. However, this is about individuals, the ones who produced stupendous shows consistently during IPL 2018. Here s CricketCountry s IPL 2018 Dream XI:

Narine the mystery spinner had been good enough to take KKR to title wins in 2012 and 2014. Narine the pinch hitter has helped KKR add more balance to their line-up. He has opened and destroyed bowling attacks at will. 357 runs at 22.31 may not sound great but those runs came at a strike rate of 190!

To add to that, he picked 17 wickets from 16 matches and finished the joint-fifth highest wicket-taker in the tournament.

Narine was awarded the Most Valuable Player (MVP) of the tournament. KKR finished third.

Prior to 2016, Rahul s strike rate in IPL was 107. He has certainly been India s most improved batsman over the last two years. Known more for this orthodox approach, he started the tournament by recording the fastest fifty in IPL history, reaching the landmark in just 16 balls.

He continued with his sublime form throughout the tournament with almost no support from the middle-order. Picked in the auction for a whopping INR 11.5 crores, Rahul gave his team owners value for their money.

Leading the tables at one stage, KXIP finished No. 7.

Even 10 days before the start of the tournament, Williamson wasn t sure if he would be in the SRH starting XI. David Warner s suspension led to him donning the captaincy cloak. Against the odds, Williamson led SRH and their bleak batting unit brilliantly. He slammed 8 fifties in 17 matches and was the hinge that held the team s batting.

He ended up winning the Orange Cap for amassing most runs in the tournament. As captain, he did most things except prevent the Chennai juggernaut.

SRH finished runners-up. Williamson, the captain of this side, is likely to lead SRH next season too.

Pant won the Emerging Player of the tournament. He was the glimmer of hope in yet another dismal campaign for DD. Pant s hundred against SRH was extraordinary and perhaps the best knock in the tournament.

Only 20, Pant has taken the cricket world with storm with his outrageous stroke play. Some of his strokes are yet to be named. What do you call a shot that is spooned last moment over third-man for a six?

Pant admits that he curbed his natural instincts, took more time to settle down. How do you take time and settle down and manage a strike rate of 174?

This kid is the future of Team India.

Yet another disappointing campaign for RCB but yet again you cannot raise a finger at AB. The South African Superman… wait, that catch of Alex Hales earned him the title of Spiderman .

Throughout the tournament AB stayed the AB we know, spellbinding with his absurd strokeplay and match-defining feats. Unfortunately, de Villiers and his captain Virat Kohli found little support from others on a consistent basis, and not for the first time that proved decisive for RCB.

AB s form since his return to cricket in December 2017 has been top notch and that s what makes all wonder about his abrupt international retirement.

KKR trusted Karthik with the responsibility to take over the captaincy mantle from Gautam Gambhir. He did not disappoint: he led from the front and helped Kolkata finish third. KKR were a trimmed squad and injuries had plagued the camp, but Karthik handled his resources terrifically.

Karthik has enhanced his reputation as the perfect finisher since the Nidahas Trophy Final. He did the same games for KKR, and did it with ease. He was neat behind the stumps and has managed to pip Dhoni in this side.

Unlike CSK, KKR lacked the star power in their batting armoury and Karthik did exceptionally to absorb the pressure. It was marginal call between Karthik and Dhoni. It s never easy being under the shadows of an all-time great, being his competitor. Karthik, finally, has his moment under the sun.

Ben Stokes underperformed, as did Dwayne Bravo. Hardik Pandya did much better with the ball. But Russell had the most impact. With 292.5 points, Russell was the fifth-most valuable player in the tournament. In fact, the likes of Williamson and Rashid Khan follow him in the list.

Alongside Karthik, Russell will play the role of the finisher in this side. His strike rate this season has been 185! He also had 13 wickets.

Sachin Tendulkar calls him the best spinner in T20s . The rapid rise of the Afghan teenager over the past two years has taken the world by storm. He came very close to hand SRH their second title.

Next season we may also see more of Rashid the batsman. He did not get enough opportunities with the bat but when he did he made it count. He blasted a 10-ball 34* in the Qualifier 2 to guide SRH into the final.

Narine and Rashid: isn t it a dream spin attack in T20s?

Tye was amongst the first picks in this side. His deceptive knuckle ball was among of the talks of the tournament. Last year he had bagged a hat-trick for Gujarat Lions (GL). This season he became the first bowler to bag three four-wicket hauls in a single edition. Tye walked away with the Purple Cap.

Into his ninth IPL season, Umesh made 2018 his personal best. He led the RCB attack with pace and venom. He often picked wickets in clusters, more than one in an over. He was fast and accurate, taking a wicket every 16 balls. He was one of the few positives from an otherwise disappointing RCB campaign.

Bumrah continued to enhance his reputation as one of the finest limited-overs bowlers. The searing yorkers made way for change of length and knuckle balls, but his effectiveness stayed. With more support from others, Bumrah could have guided MI to a Playoffs berth. Bowling mostly inside the Powerplay and at death, Bumrah emerged with an economy rate of 6.88.

No CSK player has made it to this side. As mentioned above, CSK found match-winners in every game and relied more on team efforts. Dhoni, Rayudu, Watson and Ngidi came close to finding spots.

Looking at it in another way, how about this team playing the champions CSK? We wish… 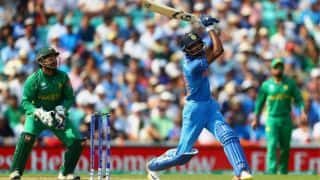