Chasing a mammoth 232 that came on the back of twin tons by Jonny Bairstow and David Warner, Bangalore were reduced to 35/6 in the eighth over.

Bangalore keep plummeting down to different lows and they are yet to get off the mark after receiving a severe 118-run defeat against Hyderabad in Match 11 of the Indian T20 League at the Rajiv Gandhi International Stadium on Sunday. (ALSO READ: Bairstow, Warner tons pummel Bangalore)

Chasing a mammoth 232 that came on the back of twin tons by Jonny Bairstow and David Warner, Bangalore were reduced to 35/6 in the eighth over with Afghan international Mohammad Nabi being the wrecker-in-chief with four wickets in his four overs going for just 11 runs.

None of the star player from the Bangalore side lived up to any expectations. Captain Virat Kohli departed for just 3 after falling prey to Sandeep Sharma, while AB de Villiers disappointed after he was cleaned up by Nabi for just 1. The West Indian Shimron Hetmyer could manage to add only 9 runs before he was stumped by Bairstow off Nabi coming down the ground.

One of our worst losses ever. Liteally nothing I can explain. Nothing went right for us from ball 1 until our last wicket fell in the second innings. We were outplayed in all departments by a quality side. They showed that they are a champion side. They were finalists last time and beat us in the final (in 2016), Kohli said at the post-match presentation ceremony.

After opting to bowl, a decision that may have backfired keeping in mind the scorching heat in Hyderabad where temperatures were in excess of 40 degrees celsius, Hyderabad were off to a record opening stand by Bairstow and Warner, who combined to add 185 the most by any opening partnership in the storied history of the tournament.

Credit to them (Warner and Bairstow). We could have tried a few different things, like pace off the ball. But once those guys got in, they just kept going. You need a few things to go your way, and a few catches fell in between fielders. They were world-class today and they deserve to be on the winning side, Kohli said.

The Indian captain explained Bangalore s decision to push Hetmyer to open the innings with Parthiv Patel, a move that clearly didn t go down well.

We thought about that initially as well. I have done well opening the batting but myself at 3 brings that balance in the side, given that I can bat with AB and put the opposition under pressure. We just need our players to put up a better challenge up front, he said.

Bangalore have still 11 matches to go and can turn the tide in their favour. They next play Rajasthan at Jaipur on April 2.

The pitch will be nice in Jaipur against the Royals. We need to bring our A-game, like we did against Mumbai and play with that kind of intensity. If we go through the motions, we need to do the regular basic stuff, and get results our way and start winning games in the tournament. The next game should be that game for us, Kohli said.

Meanwhile, Bairstow was awarded the Man of the Match for his scintillating 114 off just 56 an innings that was laced with 12 boundaries and seven towering sixes. Really pleased. Delighted to get off to the start and get a few runs today, Bairstow, who scored his maiden T20 League century, said.

The post-match presentation interview were interrupted as it began to pour heavily, just in time. Stand-in captain for Hyderabad Bhuvneshwar Kumar had just some time to laud Nabi s effort.

Shows how good a spinner he is (Nabi). He was spot on from the first ball. It was a good batting track in the second innings, but our bowling was brilliant, Bhuvneshwar, who led the side in the absence of Kane Williamson, out due to a slight niggle, said. 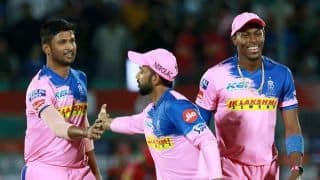 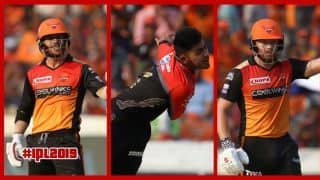