Indian run-chases have undergone a major transformation since late-2005

Indian run-chases have undergone a major transformation since late-2005

India’s phenomenal win against Australia at Jaipur demonstrates the spectacular peak the team has reached at chasing down formidable totals. Arunabha Sengupta looks back at how they turned a bend and became a fantastic chasing side since late 2005. 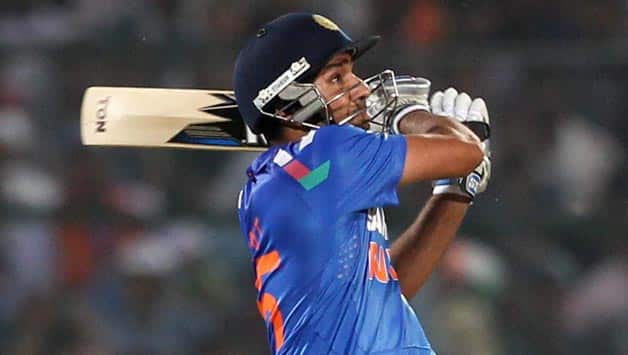 India’s phenomenal win against Australia at Jaipur demonstrates the spectacular peak the team has reached at chasing down formidable totals. Arunabha Sengupta looks back at how they turned a bend and became a fantastic chasing side since late 2005.

South Africa were playing India in the fourth match of the three-nation Titan Cup. Daryll Cullinan and Hansie Cronje had powered the Proteans to 249; setting India a target of exactly five runs an over.

Towards the fag end of an interview before the start of the Indian innings, there was time for just one more question before Sourav Ganguly faced the first ball from Fanie de Villiers. Geoff Boycott was asked, “Do you think India will be able to get the runs?” The Yorkshireman answered in his inimitable laconic manner, “No.” He did not bother to elaborate. The Indian tale of woes while chasing was well known.

Seventeen years later, in the same city, India chased down 359, and won by nine wickets with 39 balls to spare. Times have definitely changed.

The still older days take on a Jurassic hue in contrast — the days when faced with a total of 334, India had stonewalled their way to 132 for three in 60 overs, Sunil Gavaskar batting through it all to score 36 from 174 balls.

The game itself has undergone metamorphosis. Rules have changed, powerplays, fielding restrictions, the influence of Twenty 20 all have had their effect on achievable targets. However, during the past two decades, the Indian team has been transformed from a side that abhorred chasing big totals to one that relishes the challenge.

It makes sense to look at how the transitions have taken place over time — from the days when 250 seemed insurmountable to the current day when even 400 seems well within the realms of possibility.

In the following section we have carried out a decade by decade analysis of India’s chases of big targets.
As we see from the table given below, very few 300 plus targets were set in the early days of ODIs. In the 1970s and 1980s, there were only three such occurrences and India lost all of them. Of the 19 targets in the range of 250-299 they won just six. If the score went beyond 250, they won only 27 per cent of the times.

In the 1990s, the situation actually became worse. India did win one of the seven matches when set 300 plus targets — the Asia Cup final at Dhaka in 1998 — but they managed to triumph in only eight of the 36 matches where the target was between 250-299. In the decade, they won just about a fifth of the matches in which they were set 250 or more.

Things changed in the 2000s. Bat manufacturing underwent an engineering revolution, and bigger targets became more and more achievable. In the first decade of this century, the team overhauled the 250 plus targets on 30 of the 80 occasions, bringing the win-loss ratio up to 0.6. However, only a quarter of the 300 plus targets were successfully overcome.

And after 2010, the wins have been more than losses in the quests to overhaul 250 plus scores, and even totals over 300 have been chased down as many times as they have proved too much.

However, the period after 2000 deserves to be looked at in some further detail. There were two major triggers of change during this phase.

Firstly, Rahul Dravid’s rejuvenated Indian team started the saga of successful chases from October 2005, and a method was perhaps discovered in gearing towards huge targets.

And soon there was the Twenty 20 revolution, which made previously imposing asking rates seem puny. After India emerged victorious in the Twenty20 World Cup in 2007, the major proliferation of the format took place with the Indian Premier League (IPL) in 2008. Subsequently batsmen started playing strokes that had not existed in even the shelf holding the coaching manuals of the game.

We can indeed take October 2005 as the watershed moment for Indian chases.

However, since October 2005, the transformation has been spectacular. The table given below looks at the same sequence as above but with a split from this defining moment. The resulting difference is very evident from the numbers.


(Arunabha Sengupta is a cricket historian and Chief Cricket Writer at CricketCountry. He writes about the history and the romance of the game, punctuated often by opinions about modern day cricket, while his post-graduate degree in statistics peeps through in occasional analytical pieces. The author of three novels, he can be followed on Twitter at http://twiter.com/senantix)

India vs Australia 2013: Shikhar Dhawan says Mohali is lucky for him